When the iPad 3 released earlier this year its main selling point was the Retina display, and that it was the best screen on a mobile device. That was just a few months ago and it shoes how quick technology moves forward, especially when you see LG stating they now have “the highest resolution” panel on a mobile device to date.

The iPhone 5 is expected to get a release date towards the end of this year, not at WWDC 2012 as would have been expected in previous years, and this phone should also include the stunning Retina display, which has already been beaten if we’re to take LG’s word for it. Future LG phones should include the 5-inch full HD LCD panel that’s based on AH-IPS tech, and this display supports a resolution of 1920×1080 and 440ppi.

Some facts don’t add up — Apple state the iPad 3 has better than HDTV quality, although LG now state their technology is the first time full HDTV quality is on a smartphone, so it either means the brands are trying to confuse consumers or the iPad 3 has a higher quality display than these new LG phones, which is not a smartphone. Checkout the full press release below, leave a comment, or head over to Engadget for their take on this news.

Do you really care who has the best smartphone display, or have you already decided on your next phone? You might also want to read our recent article about iPhone 5 and iPad 4 manufacturing. 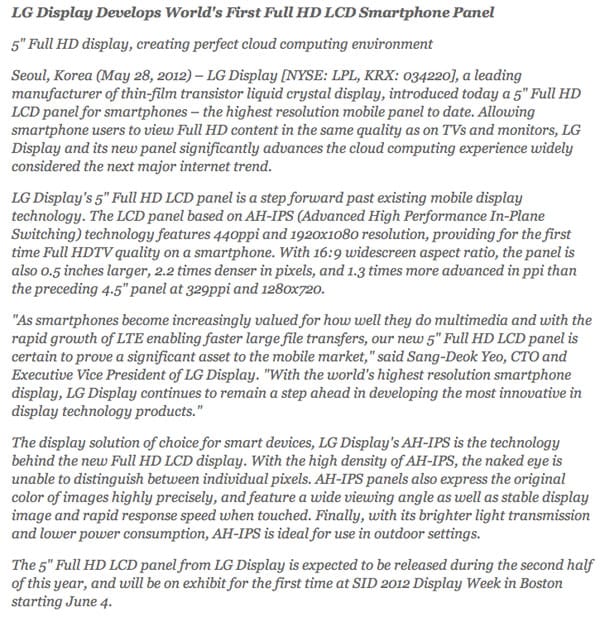