Well what do we have here? After talking about the iPhone 4S this week and it’s possible appearance at WWDC 2011, we now have a bit of a bombshell to share with you. It looks like Apple has secretly begun shooting commericals for their upcoming iPhone 5 handset.

A listing appeared on Craigslist asking for iPhone 5 commercial participants, and it looks like may be genuine since the listing was removed a few hours after being online. Luckily for you, a screenshot was captured courtesy of Mac Rumors and you can check it out below: 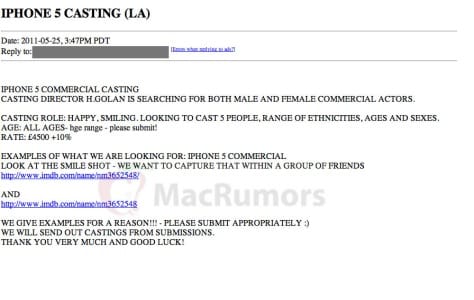 Titled ‘iPhone 5 Casting’, it specifically asks for ‘happy’ and ‘smiling’ people, 5 to be exact split up into different age groups, sex and ethnicities. According to the listing, Apple are apparently willing to pay a very generous sum for the commerical – £4500 + 10% states the listing. We’re not sure why the currency is listed in pounds though and not dollars, especially since the commercial listing is looking for participants for the LA area.

Do you think this is real or fake? If it was fake, then why would the listing have been removed so quickly – it makes you wonder doesn’t it. Apple are obviously known for their slick commericals, so could this be the first real indication that the iPhone 5 will release after Summer as previous speculation suggests? Time will tell.