We have just told you about the September 19 release date for Apple’s iOS 6 software update, but now it’s time to focus on the brand new iPhone 5. Apple has finally unveiled the device to our delight, confirming a price, launch date and when you’ll be able to pre-order one as well.

Let’s get the juicy information out of the way first – the iPhone 5 is going to be released in selected countries on September 21st, that’s a Friday just so you’re aware. Before that, you’ll want to race online to pre-order one, with Apple announcing that pre-sales for the iPhone 5 will begin on September 14th – this coming Friday!

As for pricing – you’ll be pleased to hear that Apple has priced the iPhone 5 with the same current format as you see on the store now. That means, $199 for the 16GB, $299 for the 32GB model and $399 for the 64GB beast – all relate to contract prices with three main carriers obviously. There’s further good news for those still looking to pick up the iPhone 4 and the iPhone 4S. The iPhone 4 8GB model is now free on contract, while the iPhone 4S 16GB model can be yours for just $99 – not bad at all Apple.

We’re guessing that orders will be limited to two units per consumers as usual and it is probably going to be extremely difficult to actually order one anyway, given the extreme demand for the iPhone 5 and the inevitable stress that Apple’s online store will go through.

As for the iPhone 5, all of the rumored features have now been officially confirmed. The new device will support 4G LTE at last, while the iPhone 5 is going to equipped with the A6 processor as well which promises a x2 increase in both CPU and graphics compared to the A5 chip. 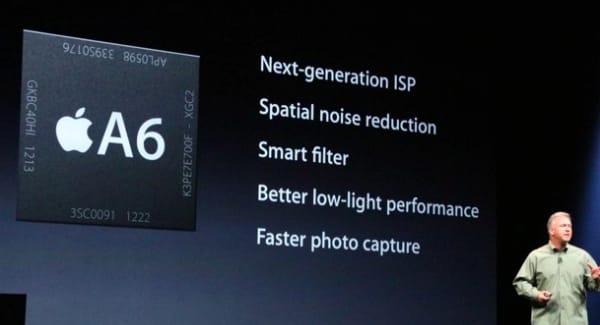 The design is exactly the same as the one we’ve all seen to death by now – aluminum unibody with the three layers on the back – available in a choice of either black or white, as usual. The new device is 20% lighter than the iPhone 4S and 18% thinner than the previous model. Apple made a clear point at their keynote to tell the audience the the iPhone 5 is now ‘the thinnest smartphone in the world’ – that’s a pretty bold statement right there.

There’s 4G LTE support for the three main players – AT&T, Sprint and Verizon, while Apple has said that battery life has been improved once again to offer 8 hours of LTE usage – again an impressive stat on paper. We’re really pleased to see that Hong Kong and Singapore are included in the first rollout as well, just like the new iPad. We’ll bring you a full list of countries soon, as Apple already confirmed a second list that will rollout after the first batch.

Look forward to a full lowdown on specs and a deeper look at iOS 6 soon. September 21 is the magical date as predicted, with a pre-order date starting this Friday. Instant purchase for you, or are you a little disappointed with the reveal?