Following weeks of leaked iPhone 5 parts appearing online it seems that one blog has managed to put the different parts together, and when doing this they worked out everything fits almost perfectly. You can see a couple of images from the reassembled iPhone 5 on this page, which includes the iPhone 4S model right next to the 6th generation iPhone.

IResQ noticed that all the screw holes lined up without any problems and they managed to fit everything inside the new frame, which the photos on this page show that frame with the headphone jack and smaller docking port inside. One popular iPhone blog points out that the change in aspect ratio could be an issue for some Apple fans, although it looks like this will be covered with iOS 6 and the new Auto Layout feature that should make everything fit nicely.

After looking at what seems to be an iPhone 4S vs. iPhone 5 comparison, seen below, let us know what you think? Are you happy with the change in size and new smaller docking/power port? The certified Apple repairer points out that the new iPhone 5 is expected to include one speaker like the current models, although they did state that some parts are still missing, which included certain fittings and plastic gaskets. 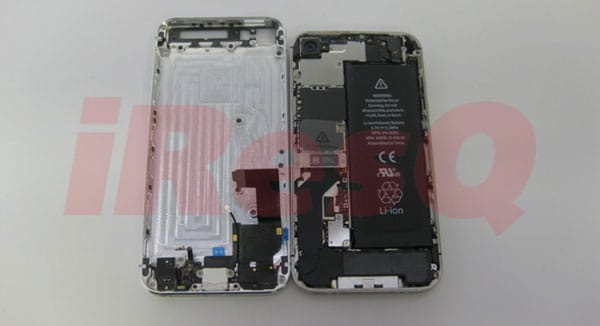 Importance of iPhone 5 and iOS 6 for each user – There will be well over 200 new features in iOS 6 and iPhone 5 is expected to bring the first redesign in a couple of generations, although the importance of these new features will depend on your priorities. Some people are looking forward to iOS 6 with no real care for new hardware, others cannot wait for improvements to Bluetooth and what it means for their other Apple gadgets, although new Apple patents help emphasize what the majority of users really want and that’s much better battery life.

How are you feeling about the final form factor for iPhone 5? If this is the final frame for the next iPhone then you’ll need to get used to it, especially if you’ve decided to buy the next generation already. The smartphone industry has slowed by a noticeable amount this year in preparation for what looks to be the biggest smartphone launch of all time, although Apple fans will point out this happens every year when a new iPhone is launched.

Will you be one of the first lining up on the iPhone 5 release date? Apple hasn’t issued any event invites just yet, but the majority of tech blogs are expecting an event on September 12 and the launch of the next iPhone just a few days later. It is fair to say that most of us have a clear idea on the iPhone 5 design and specs with confirmation needed from Apple, so it now seems like a good time to look at your budget for some new Apple hardware.