As Android and iOS fans gear up for arguably the biggest smartphone launches to date in relation to the iPhone 5 and the still unannounced Nexus Prime, a recent study has concluded that demand for Apple’s device is far great than that for Google’s upcoming phone.

The study has been conducted by mobile ad network InMobi and it reveals that the iPhone 5 is far more desirable than devices from Google and RIM’s Blackberry smartphones, as reported from AppleInsider. Consumers were surveyed from the US, Canada and Europe and although the stats suggest that Apple’s devices are leading the way in terms of consumer demand, it remains to be seen whether these stats really reflect on public opinion. 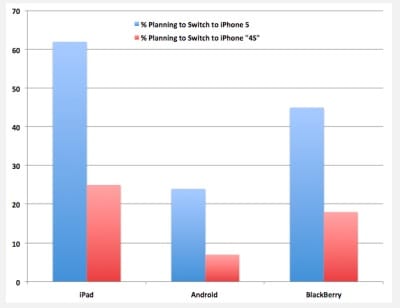 We say this because many similar surveys have been revealed in the past, only to be shot down due to a lack of truth over the claims. Judging by the included diagrams from InMobi, Apple will be very pleased to see that demand is apparently sky high for the iPhone 5, but is it really that far ahead of anticipation for the Nexus Prime?

The iPhone 5 will be unveiled on October 4th at Apple’s upcoming event of course, but there is still no official word on when Google will announce the Nexus Prime, despite the fact that it seems inevitable that it’s coming. Google has confirmed Ice Cream Sandwich for an October release, so it is more than likely that October will see Apple and Google participate in a vicious sales war over the iPhone 5 and Nexus Prime.

If you are an Android owner reading this, would you agree with the study suggesting that the iPhone 5 is the most in-demand smartphone at the moment, or do you think the Nexus Prime will surpass the iPhone 5 in sales once it becomes available? Both smartphones are going to be the cream of the crop regardless and it will certainly cast a worrying shadow on the likes of Microsoft and RIM as they try to play catch up.