There will be many owners of the iPhone 4S currently downloading the Corona Jailbreak now it has gone live. While the current version is being jailbroken reports of what Apple may be planning for their next smartphone begin to emerge. Today we have news that the iPhone 5 may release with reshaped batteries powering it following a patent application.

A lot of speculation about the iPhone in the last year or so has talked about the device having LTE connectivity. Apple hasn’t put the technology into their handset because the current chips are not only too large, but also put too much strain on the battery. According to a report on Cult of Mac the iPhone 4S would probably last under six hours if it was connected to a LTE network.

There are a couple of things that could address this in the coming months though, as firstly new LTE chipsets are on route that are not only smaller, but also demand less power. Secondly a new Apple patent application reveals that the company is looking to make batteries slimmer and more efficient.

What Apple is working on could mean all iOS devices and even MacBooks may benefit from vastly improved battery life. The revolutionary new units will be made up of electrode sheets with a variety of different dimensions. This could mean that instead of the usual rectangle shape we have become accustomed too, batteries could be designed to fit the shape of the device.

Any such device in the iPhone could be L-shaped so that the battery fits around the components, which could provide a larger capacity with better efficiency. The patent was originally found by Patently Apple, and it includes a variety of battery shapes and sizes. One example shows an iPad with the battery sitting behind the bezel and goes around the edge of the device. This then leaves all the middle of the device free for the other components.

These types of batteries will allow Apple to continue providing light and thin devices, but with an improved battery life. Check out the image below from Patently Apple. What do you think of the Apple idea? 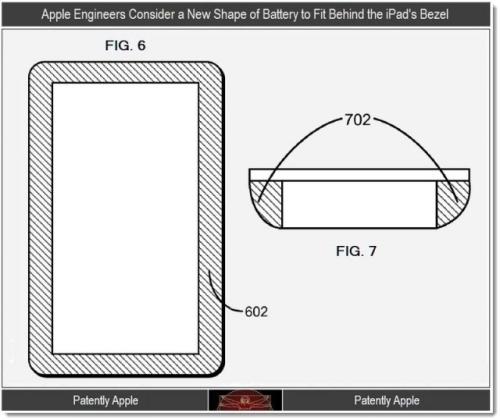