The much-anticipated launch of the Verizon iPhone 4 seems to have been a bit of a disappointment. The reason I say this is because the two videos that I have seen, one that was on Engadget, and the other an Associated Press report. The lines at a number of Apple and Verizon stores across the U.S. were not as large as we have seen on AT&T launch days, and we have reason to believe that the iPhone 5 is the cause.

The first video is from an Apple store, after watching I was cringing; I think if I were those two people I would have left and ordered online. The reason I say this is because there is about 40 Apple Store staff and just two customers waiting in line for the Verizon iPhone. That’s not the worst part; it is all the staff clapping for at least 30 seconds.

In that VP report it suggest that the demand for these new handsets were meet by pre-orders; but they still feel that the poor showing in stores shows that Verizon do not have the power that we all assumed they did. We do not believe that for one moment, recent comments from our readers suggest that knowing that the iPhone 5 could be 4 months away is certainly something that would stop them getting the CDMA version of Apple’s smartphone. 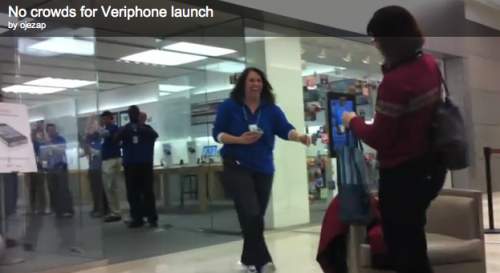 Beatweek points out that we should not be put off my short lines at either Apple or Verizon stores, as this only makes up a small percentage of sales. There is some truth in this, as we recently reported that Verizon announced record one-day sales for a launch of a new device.

Do you think that the idea of the iPhone 5 has affected sales for Verizon?