The release date for the iPhone 5 is still a much-discussed topic, with rumors suggesting it to be available either in September or October. To top it off, we are no closer to knowing what the specs will be either, but they will need to be special if Apple has any hope of fending off the Galaxy S II, Droid Bionic and the EVO 3D. All three have what it takes to topple the iPhone, which you can clearly see from one of the Infograhics that we have for you below.

The first Infographic looks at all the main features that make a smartphone what it is, so you can see that the platform is dominated by Android. The iPhone 5 looks to be losing the connectivity round as well, as it looks as though it will lack LTE. It does not fare any better in the processor category either, as the iPhone 5 looks to just have dual-core 1GHz CPU, whereas one or two of the others have a 1.2GHz dual-fore processor. 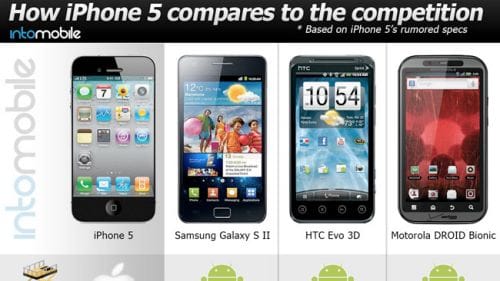 However, Apple should be able to win the display round — unless you want 3D that is? The area where we are uncertain of is the camera, as we cannot be sure if Apple will give us a 5-megapixel or an 8-Megapixel shooter. The next Infographic thanks to IntoMobile is a look at the evolution of the iPhone itself, from the start in 2007 to what the iPhone 5 could offer. 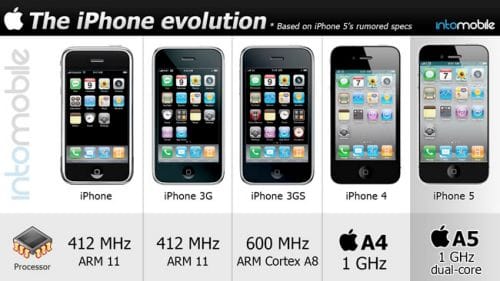 The hardware has not changed as much as you would have thought really. Ok, so we know that the CPU, memory and the camera has seen improvements, but when you consider that the fifth-generation iPhone will soon be released its evolution has been a little on the slow side. The greatest achievements have come from the App Store and iOS. However, this year will see the greatest evolution, and that is with the introduction of iCloud.