It looks like Apple may have an iPhone 5 camera problem on their hands. After apparently ending the infamous antenna gate issues involving the last iPhone, complaints have started to mount on a strange purple flare that appears when shooting pictures on the iphone 5.

Apple has only just finished providing a fix for the Verizon iPhone 5 relating to a data bug, but this new camera problem may turn out to be even more frustrating for users. You may not have noticed it yet, but shooting pictures on the iPhone 5, may result in a purple glare on the finished image, compared to no purple glare when looking at the same image on the iPhone 4 or 4S.

A sample picture of the problem can be seen below, giving you an exact look at the issue and after initially dismissing the problem as a one off case, Apple has since replied to a user complaint suggesting that they are holding the device in the wrong position when taking pictures. 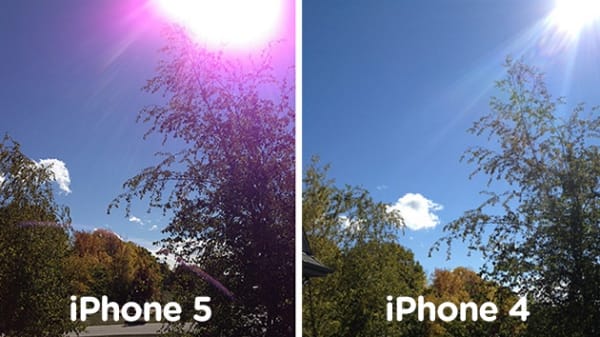 To eliminate the problem, Apple has suggested that users hold the camera away from bright light areas when taking pictures and that the purple glare seen in some pictures is ‘normal behavior’ of the iPhone 5. Since Apple has acknowledged the issue, it’s clear that there does appear to be something in the way that is causing the pictures to turn purple – don’t expect Apple to dish out a full clear cut explanation though.

Upon further reading, it looks like the choice of glass that Apple used for the rear camera lens could be to blame for the purple tint, which is Sapphire for those that are interested. At the moment, this problem only appears to be affecting a small minority, but it will be interesting to see over the next couple of weeks if it escalates and if it does, what action Apple will take.

If it is the glass that is causing the problem, then that is obviously a serious issue for Apple and one that can’t be fixed with a simple software update. Have you seen any shades of purple when shooting images on your iPhone 5? Let us know your findings below.