Back in November 2010 we suggested that the iPhone 5 may feature built-in NFC, now we are hearing more rumors suggesting that this will be the case for both the iPhone 5 and iPad 2, this may well be the kickstart that contactless payment methods needed to become a widely adopted way of spending money.

You can find out all you need to know about Near field communication (NFC) here, according to a recent Bloomberg article the director of consulting firm Envisioneering Group believes that it is likely that this technology will be introduced into Apple devices this year, whilst Crone Consulting LLC’s Richard Crone said “It would make a lot of sense for Apple to include NFC functionality in its products”.

Apparently NFC payments can be made from a distance of up to 4-inches away, large companies like PayPal are keen for smartphone manufacturers to feature NFC in their future products, also a Mastercard representative revealed that the company has already trialled NFC around the world and see it “as an opportunity to partner with organizations”, you can read more about this here. 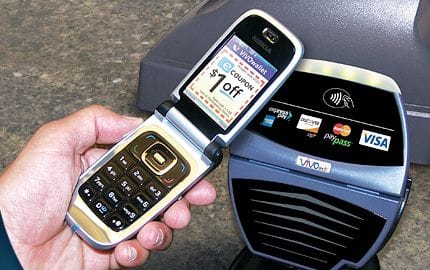 Many people are optimistic about NFC being included in future portable devices, however are equally concerned about the fraud-related risks this technology may be susceptible to, however NFC Forum suggests that the short transmission range and underlying layers of NFC technology ensure that transactions are secure.

Will you used NFC?