Have you picked up an iPhone 4S handset from Apple yet? If so, you probably have had a good session with Siri by now, arguably the most impressive feature on the new device aside from the upgraded hardware. Is Siri a hit in your eyes, or does Apple’s new voice software need improving?

If you haven’t seen the buzz about Siri lately, you are definitely missing out, as Apple has yet again brought existing technology (Yes, Android has it too!) to the mainstream and innovated voice control features in a way which could, potentially change the way consumers use their iPhones from this point onwards.

The ability to send a text message purely by voice for example is proving to be a hit with consumers and performing simple tasks such as bringing up maps (US only for the time being), instant cooking recipes or even find out the latest updates on Earthquake movements. 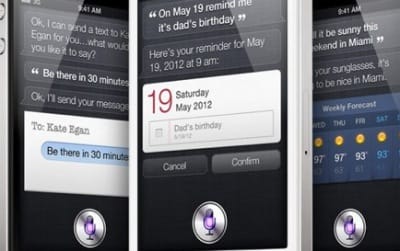 Last week we showed you a video highlighting some of Siri’s problems dealing with strong foreign English accents, but now we want to know what US and UK consumers think of Siri, a few days after launching. Unfortunately a host of Siri features are only available for US consumers such as maps and directions, but the good news is that more support and functionality is on the way soon for other countries – Siri is still in beta after all according to Apple’s website.

Have you had any hilarious replies from Siri yet, or are you still struggling to get Siri to pronounce your name correctly? If you haven’t explored the Wolfram Alpha functionality of Siri yet, you should definitely try it out as it expands the capabilities even further on what Siri can come up with based on your questions.

If you’re looking for a quick giggle with Siri, try asking it some Microsoft related questions – We wonder if Steve Jobs had a hand in selecting what Siri replies, needless to say, it’s pretty hilarious stuff.

How impressed are you with Siri so far?