It’s been just three days since the Apple iPhone 4S was made available and it is already smashing records when it comes to sales. After it was launched for pre-order last week, it managed to gain a total of one million orders placed in the first 24 hours, despite disappointment from critics, breaking the previous iPhone 4 record of 600,000 in total last year. Reports now show that the total number of iPhone 4S devices sold so far has reached a staggering 4 million.

This record makes it the fastest-selling iPhone ever; even the iPhone 4 only managed to sell 1.7 million in the first three days, it also means the device is on the verge of surpassing the record for fastest-selling gadget of all time, currently held by Microsoft’s Kinect, which famously sold over 8 million in the first 60 days of being on sale. All this despite a lack of enthusiasm and limited technological advancement compared to the previous models.

The only changes that were made to this year’s device were the addition of a voice-recognition program called Siri, an improved 8 megapixel camera and faster processors, but it seems these changes were enough to get people buying the new device. in addition to the sales of its new device Apple has also enjoyed great success with its new operating system, iOS 5, which 25 million existing customers, not including iPhone 4S owners, have already downloaded although it was only made available last Wednesday.

As the Guardian explains, the figures show Apple’s growing dominance in the market. The device is enjoying record breaking success despite not being rolled out to all countries yet. It is currently only available to those in a select amount of countries including the UK, US, Japan, Germany and France. The company intends of launching it in another 22 countries from October 28th and aims to have launched it to 70 countries all together by the end of the year. Have you bought an iPhone 4S yet? Do you intend to get one? 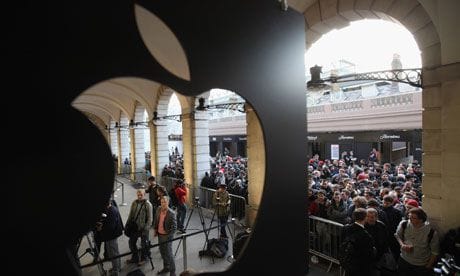