You won’t need us to tell you that today is officially Apple iPhone 4S day. The long awaited device finally goes on sale today, and if you opted against receiving a device to your door via pre-ordering, Apple will sell their new iPhone at retail stores across parts of America and Europe.

In what has become traditional format for a new iPhone launch, you can bet that iPhone 4S lines are now in full flow as excited fans are prepared to spend a night outside in the cold, as long as they reserve their spot in the queue to be one of the first to pick up the device ahead of everyone else.

In a surprising turn of events, it has been confirmed that none other than Apple co-founder Steve Wozniak is first in line to receive his iPhone 4S at the Apple Store in Los Gatos, California as reported from CNN. Wozniak, along with Steve Jobs built and sold the very first Apple computer back in 1976 and despite parting the company in 1987, he remains an employee and share holder of the company, picking up ‘a couple of hundred dollars’ as a pay check every two weeks from Apple.

Given Wozniak’s legendary status, you can imagine the surprise when fellow queuers saw Wozniak join them in the iPhone 4S line as a fan. He wasn’t first in line at the start, but apparently some fans felt that he should get the device first and proceeded to let Wozniak move ahead of them in the line, to which he now finds himself in first place.

Here is a picture of him happily tapping away on his iPad, first in line outside the Apple Store. 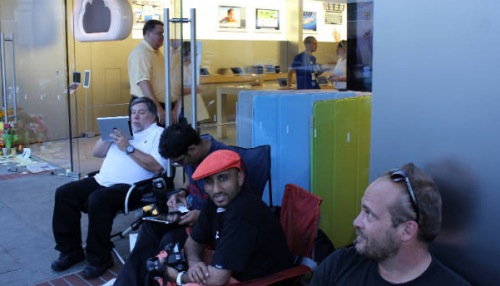 While it probably wouldn’t be too difficult for the man to get his device sent to his home before anyone else, it looks like Wozniak wants to enjoy the excitement of a new Apple product launch, with the millions of fans that help make the company a success year after year. Here is a quote from Wozniak during the line:

”I want to get mine along with the millions of other fans. I just want to be able to talk to my phone.”

What an interesting story and how refreshing is it to see Steve queuing up with fans, happy to take photos and sign autographs as fans demand them. If you have walked past this Apple Store in California, let us know if you saw Steve Wozniak first in line or not.