Celebrate Independence Day with a great iPhone cover. Be the envy of all your friends with commemorative iPhone covers. Out of the many different styles to choose from, we have highlighted four that we thought you might like.

Independence Day also known as the 4th of July is a federal holiday commemorating the adoption of the declaration of independence on July 4, 1776, in the United States. Celebrating the independence from the United Kingdom is a massive event where parades, fireworks, carnivals, fairs, ceremonies and other main events occur. In 2009, New York City had the largest fireworks display in the country, with over 22 tons of pyrotechnics exploded.

Americans celebrate independence on July 4, the date shown on the much-publicized Declaration of Independence, rather than on July 2, the date the resolution of independence was approved in a closed session of Congress. Historians have long disputed whether Congress actually signed the Declaration of Independence on July 4, even though Thomas Jefferson, John Adams, and Benjamin Franklin all later wrote that they had signed it on that day.

Limited edition phone covers are a great way to celebrate this 4th of July. On speckproducts.com, there are two special limited edition patriot covers for the iPhone 4 to choose from. The Star Spangled Stripes cover is available for $29.95 and is made from polycarbonate, polyester, and weighs 0.6 ounces this cover has a form fit two-piece hard shell case design to protect your phone from scuffs and scratches.

Twilight’s Gleaming Stars is also available for $29.95 and fits both Verizon and AT&T iPhone models. These limited edition covers have original fabric-wrapped patterns that give your iPhone cover a fabulous tailored look. With both of these phone covers speck will donate $15 from each flag case sold to the Wounded Warrior Project, so you will feel that your money will also go to a good cause.

The Vintage US Army Uncle Sam custom iPhone speck case is a bit more expensive at $51.40 on Zazzle.com. Vintage Patriotic Uncle Sam created By ArtisticFootprints has the classic image “I Want You” for that iconic look. The Bald Eagle American Flag iPhone Case is available for $39.95 also accessible on Zazzle.com. Created by tjustleft this case weighs 2 ounces and displays a great artist image of the great bald eagle. 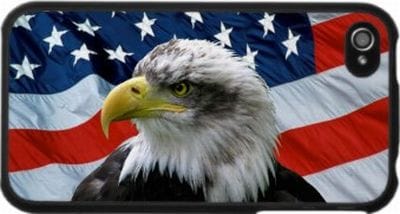 With many, more choose from, get your ideal iPhone cover for that celebration day and show it off to your friends. For details on more iPhone covers, visit Zazzle.com.