We have some interesting news to bring you ahead of the imminent release of RIM’s BlackBerry Playbook tablet, as company VP of senior business marketing Jeff McDowell has said that the Playbook will have ‘equal’ or ‘better’ battery life than the Apple iPad.

As reported from Engadget, it seems as if RIM’s previous stance on the Playbook’s battery life has changed, as they once said that the Playbook would only offer the same amount as the Apple iPad.

However, potential Playbook owners will be pleased to hear that the device will offer at worst the same amount of power as the iPad, if not greater – which could be another key incentive in your decision to buy one or not. 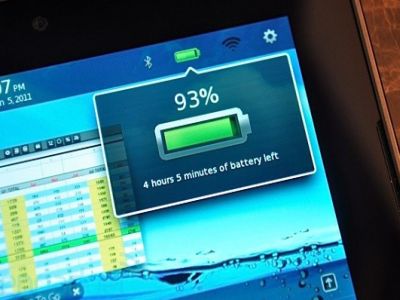 Then again, this is the first-generation iPad that we’re using this comparison on – who knows what final specs the iPad 2 will have, as Apple are obviously planning to upgrade many of their existing iPad components.

Hopefully we’ll be able to bring you some actual proof of the Playbook’s battery life claims soon. If RIM’s device does indeed have better battery life, is that a deal changer for you, or would you still prefer the iPad?