Speculation is still continuing to run wild on the thought of Apple finally giving in to consumer demand and unleashing an iPad with a larger display. We have seen Samsung once again kick off the 12-inch tablet trend with the Galaxy Note Pro and Tab Pro series, but towards the end of the year we could see Apple offer a 12.9-inch iPad Pro sending out their own statement.

Rumors have been quiet as of late, but now we switch our attention to the concept side of things as we have seen some exciting activity. Many consumers are now under the impression that a bigger iPad is definitely coming and now we have a iPad Pro specs insight to share with you thanks to arguably the best concept design seen so far.

The concept in which you see here has been brought to us courtesy of Curved Labs, a design team based in Germany. We get a stunning glance at how a 12.9-inch display may look like in reality, with the big difference here being that it comes with Apple’s new Touch ID technology. 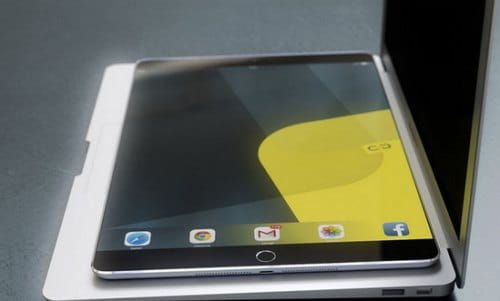 We have already seen Touch ID successfully deployed on the iPhone 5S, with many now expecting Apple to offer the same fingerprint-scanning feature on the new 2014 iPad range as well.

The images you see here offers a professional render on just how a Touch ID-supported iPad would look. It looks rather impressive we have to say, while other standout features include 4K video support and an edge to edge display which most of you would love to see in reality.

A 13-inch iPad with 4K, Touch ID and an edge to edge display sounds ideal to us. Let us know your thoughts on this particular concept design and your own dream iPad Pro specs.