If we are to see an Apple event next week then you can expect press invites to go out any day now, and you’ll also see mounting evidence towards what products will be at that event, which is exactly what we’ve seen with the new iPad mini. Price is one of the most important factors when downsizing a product, and in the case of the iPad mini price it should take into account the pricing for a number of other new products like Samsung’s Windows 8 ultrabooks and other 7-inch tablets.

Apple’s brand could deliver a premium iPad mini price – within the last 24 hours an inventory listing revealed what the new iPad mini price could be, thanks to this source, and that image can be seen below with prices in Euros. This leak aims to confirm not only the “iPad Mini” name, but also a range of models that include Wi-Fi and cellular options. You can also see storage options for the iPad mini, and these range from 8GB up to 64GB, which the latter is pretty important considering iPads don’t include a card expansion slot.

The iPad mini price is said to range from 249Euros up to 649Euros for the cellular 64GB option, although it is worth noting that these prices won’t translate directly into dollars, so doing a currency conversion won’t work considering different tax’s etc. You can expect the 8GB Wi-Fi iPad mini to launch in the United States for around $250 to $300. 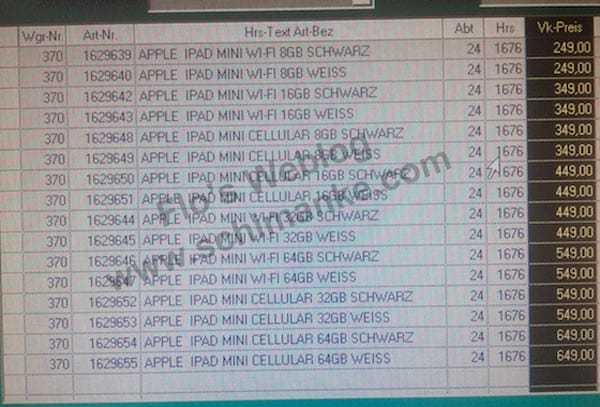 If you expect Apple products to be one of the cheapest when compared to the competition then you don’t know Apple, and as such the iPad mini will have a price point that could likely make it one of the most expensive tablets for the lower-end of this market. Apple has a following that could be willing to pay a higher price, in most cases, so we’d expect them to price the iPad mini accordingly and this leaked inventory reveals pricing as expected.

How do you think Apple’s iPad mini will compare to Amazon’s 7-inch Kindle Fire HD, and Google’s 7-inch Nexus 7? Both of these tablets sell for around the same as the expected iPad mini price, although we’re sure for the majority of Apple fans it will be more about what device has iOS, especially if you’ve invested a lot of money in that OS over the years. Are you happy to purchase an iPad mini with these prices?