We don’t expect everyone to understand why an iPad mini might be needed, especially when the original 10-inch Apple tablet fits in perfectly with your smartphone and other gadgets. The fact is there’s a market for the iPad mini, and when Apple make the announcement in the coming days it will be met with an army of people lining up to purchase the 7-inch option, although this might not include some Android users with large screen phones like the Galaxy Note 2.

Earlier today we reported about iPad mini accessories and how secret boxes were turning up at a certain electronics retailer, then shortly after that we published some predictions for the iPad mini invites and when we’d likely see them if we’re to believe the rumored date for October’s media event.

Within the last few hours we also picked up on some leaked iPad mini battery pictures, which are also hinting towards the expected battery life for the iPad mini. If the 4490mAh Li-ion Polymer battery seen in the pictures on this page, thanks to this popular Apple blog, came from Apple’s iPad mini then we should expect around 10 hours of battery life when you take the reduced screen size into account and 32nm System-on-Chip. Some people might find this a missed opportunity for Apple to launch a smaller tablet with a much longer battery life. 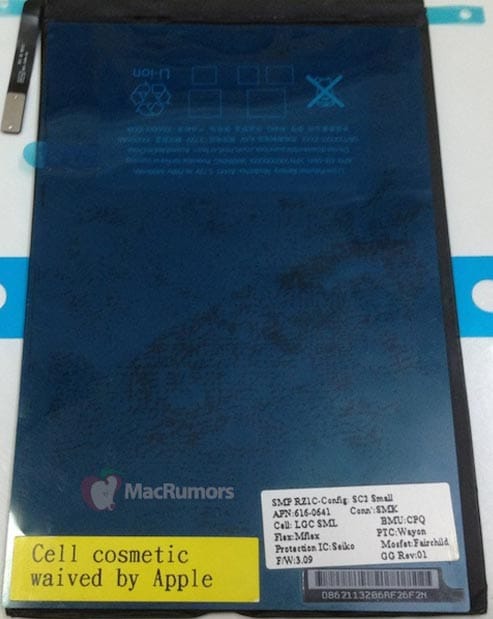 It is not known if these parts are from a finished iPad mini, and there hasn’t been as many leaks like there were with the iPhone 5 over the course of this year, so very little is known about the rumored iPad mini but numerous sources expect the Retina display to be gone and while most Apple fans agree this will happen, it doesn’t mean they like the idea of it for a smaller iPad.

You can see in these pictures that the battery markings are pretty similar to official photos of real Apple batteries, so this is either a very good fake or the real deal, but again we must highlight the possibility that this could be an iPad mini battery from a previous prototype that has only just leaked now.

What would it take for you to purchase an iPad mini? Is there a certain price that would be a deal breaker for you? You’ll also notice the blank spots on the battery, so this shows a part not ready to be shipped and could be awaiting approval for the iPad mini. We’ll update you when Apple gives us the full iPad mini specs and official launch date, so for now hit the comments with your thoughts on these battery photos.