While the Note Pro 12.2 has already confirmed to have a price shocker at £649, we don’t know how Samsung will play their hand with the Galaxy Tab Pro 8.4 pricing.

Hopefully it won’t be overpriced just for the sake of being a new tablet, but more in line with the iPad Mini with Retina which costs $299 and the popular Nexus 7 2013 which remains unbeatable at just $230.

As we await this crucial piece of information, allow us to point you in the direction of an excellent video below. It compares the iPad Mini 2 and Nexus 7 Vs the Galaxy Tab Pro 8.4 with the emphasis being on size. 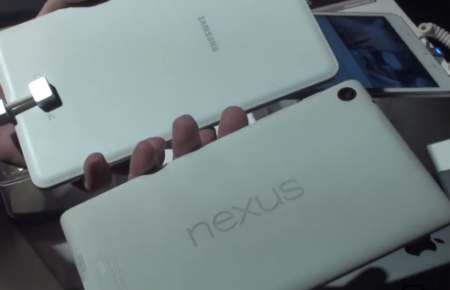 Samsung’s tablet is obviously the bigger of the three at 8.4-inches, while the iPad Mini 2 is the middle range device at 7.9 inches. In the video you can see how the Nexus 7 and iPad Mini 2 look when side-by-side against Samsung’s new tablet.

8.4-inches definitely doesn’t look out of place on this occasion and the powerful 1.9 GHz octa-core Samsung Exynos processor on board (WiFi model) may just tempt you into a purchase ahead of the Nexus 7 and Apple’s device.

Then again, Google may be planning to play their hand later on in the year, with a Nexus 8 2014 tablet heavily rumored. We already know that Apple will launch a 13-inch iPad Pro, but is there a chance that we will see an iPad Mini 3 as well to satisfy consumers who want a hardware upgrade?

If you are a fan of the smaller-sized tablet, let us know which one you would choose between a Nexus, iPad or Galaxy Tab Pro 8.4.