If you are an Apple iPad owner and have been frantically searching for alternatives to the official camera connection kit, we have news for you. A new device is currently available in China, and it’s said to be better than the original.

It is not often that you get a knock-off device which is better than it’s genuine counterpart, but with the new 3-in-1 camera connection kit from China, it looks a lot better than the real thing.

As reported from Gizmodo, the device supports input for USB, standard SD cards and now Micro SD cards too. So if you are looking for a cheap way to transfer all your photos from cameras or other devices onto the iPad, you’ll definitely be needing this.

It is available to buy now, priced at around $29 from the Mic Gadget store. You can pre-order it now and it will be ready for shipping in January. So what’s different from the official one from Apple you ask?

Well, it’s true Apple sells theirs for $29 as well, but there are a few key differences. Firstly, the official one comes with two separate connectors, one for USB and one for SD card. The knockoff one from China gives you a 3-in-1 option via a single connector and also adds support for Micro SD input. It’s pretty straight forward really. 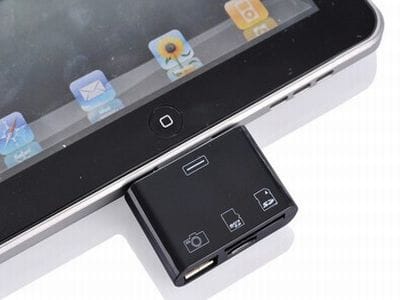 If you are interested in picking one up, hit the link to the Mic Gadget store above. Let us know your thoughts on the device, particularly if you already have an official one.