If you are a current owner of an Apple tablet you might be wondering if you should upgrade right now, and as such it could be the iPad Air vs. iPad 4 specs you want to know more about.

Apple stated that their new iPad Air is the most powerful tablet they released to date, so you might own the 4th generation iPad with Retina display and be wondering if you should upgrade in 2013? 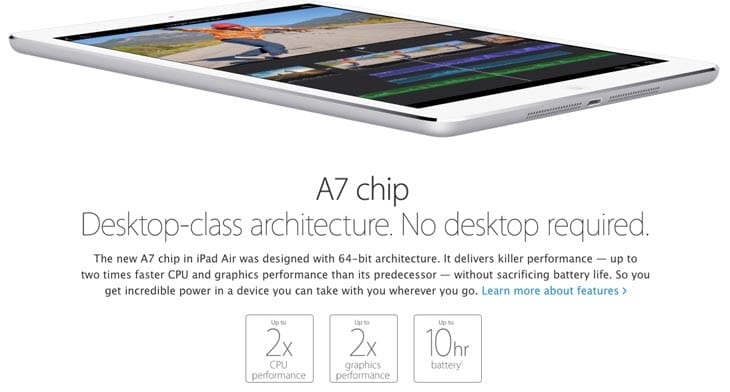 One fact you need to know is that Apple discontinued the iPad 4, and this is exactly what they did just 7 months after releasing the 3rd generation model although the iPad 4 managed to get a whole 12 months before being replaced.

When you look at the official online page for Apple’s comparison of iPads, it compares iPad Air to iPad 2, iPad mini with Retina and the original iPad mini. This is because these are the only currently sold iPads, so this won’t help if you own last years model.

Apple iPad Air vs. iPad 4 specs, weight and size — take a look below to see how a number of features compare between iPad Air and iPad 4. This includes the battery life, price, cameras, storage options, processor, weight, and dimensions.

Do you think it is worth upgrading from iPad 4 to iPad Air? Leave a comment below with your thoughts on the 5th generation iPad and if you would upgrade from whatever generation you currently own.