When Apple revealed the new iPad Air last October they ran through its design and all the new features, one of which included its performance. More often than not when a device sees an increase in speed this is likely at the expense of battery life. However, Apple said this would not be the case and that the iPad Air battery life would still be very impressive.

It’s for this very reason why Which decided to come up with its own iPad Air battery life comparison to see how it compares to the alternatives, which as we know are Android from the likes of Samsung, ASUS, and even other iPads.

Which never started the comparison out with the iPad Air as a base, it just ended up that way. The thing is, in recent tests the 2014 Samsung Galaxy Note 10.1 proved to be faster than the new iPad, and so the consumer campaigning charity wanted to see how some of the more popular tablets would compare in terms of battery life. 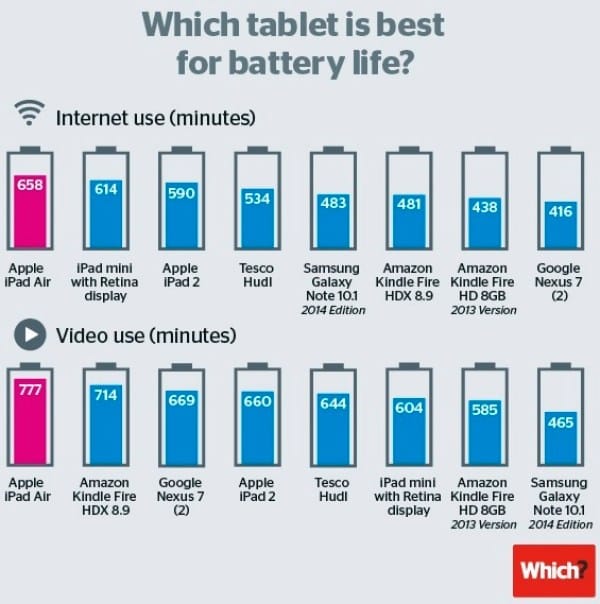 During these tests each tablet was studied to see how well the battery performed when browsing the Internet and watching videos, and the image above shows them very results.

We know that the iPad Air is not the fastest tablet in terms of performance, but when it comes to battery life, it beats the alternatives. Saying that, the iPad mini with Retina and the iPad 2 beat all the Android alternatives in the test for web browsing as well.

The iPad Air battery life for web browsing was 658 minutes compared to 483 minutes for the 2014 Samsung Galaxy Note 10.1. We do find the test a little biased though because Which seems to have pitted the iPad Air against some of the cheaper Android tablets.

What we would like to see is the iPad Air compared to the Galaxy Note and Tab Pro tablets, as this would be a much fairer comparison.