Although Apple has managed to win over a lot of tech fans with their new iPad Mini with Retina tablet, recent statistics have shown that the iPad Air is still ruling supreme. Some new iPad Air Vs iPad Mini 2 sales figures are in and it proves that there is still increased demand for Apple’s standard tablet form factor.

Apple are known for remaining absolutely silent on the number of iPad tablets they have sold, until their next press conference comes around of course, when Tim Cook will happily spill the details with a smile on his face.

That hasn’t stopped third parties from doing their own research though. One example of this comes from the Consumer Intelligence Research Partners (CIRP), who concluded that the iPad Air has accounted for 41 percent of all total iPad sales throughout the busy December 2013 period and of course throughout the Christmas sales too.

In comparison, we can tell you that Apple’s iPad Mini with Retina has only accounted for 16 percent of iPad sales in the same period, meaning that consumers have been less interested in buying the smaller size. 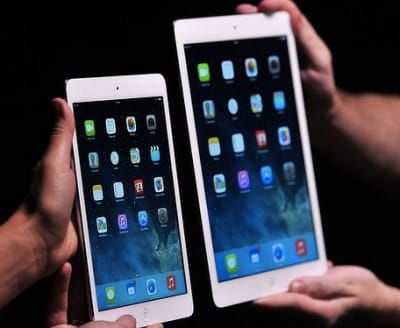 Does this key information now tell Apple that they should press forward and go full steam ahead with the 12.9-inch iPad Pro that everyone seems to believe is coming in 2014? It’s clear that based on those analyst figures above, consumers are still very much in love with bigger sized tablets – so would a 12.9-inch iPad be embraced too?

It’s interesting stuff and we’re sure we’ll hear more exact details from Tim Cook soon at the next Apple event, which could be Spring 2014.

Let us know your thoughts on the iPad Air sales domination – do you own one and still love it above any other tablet on the market?