At the end of September, we gave you the first signs of retail movement as rumors continued to grow on Apple bringing a new iPad Air 2014 model to the table in October.

Walmart were one of the first retailers to quietly drop the price of the iPad Air presumably knowing that a new model was on the way. Now though, almost two weeks later we can see that Target is now bringing the fight to Walmart with an even better deal.

With the Apple October 2014 event invites now live officially, we can see that Target are looking to shift current model stock as soon as possible. If you head to their iPad Air listing here, you can see that each purchase now comes with a $100 gift card.

If that wasn’t generous enough from Target, we can also see that there’s a $20 discount off from the popular Office 365 app as well upon purchase – really good value on the whole for what is still an excellent tablet. 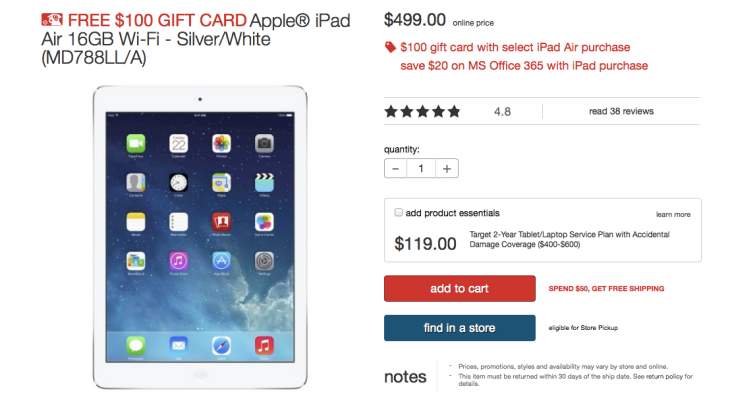 A quick check on Walmart’s listing for the 16GB WiFi model and they are still offering the iPad Air with $50 off, which was the initial deal that we told you about in September.

With Apple’s event scheduled for next Thursday, will Walmart now step up their game again and offer an even better incentive for consumers? The great thing about it obviously is that it can only mean good things in terms of lower prices as the two retail giants slug it out for your money.

Let us know if you are still interested in picking up an iPad Air tablet, now with a $100 gift card from Target to spend on whatever you want.