In a few hours it will be a week since Apple unveiled its latest tablet, the iPad Air 2, although we have only just started to see a few hands-on reviews appear because of an embargo imposed by Apple. We have already seen how it compared to the Nexus 9 in terms of its chip performance, but there have also been some interesting results where the iPad Air 2 A8X chip was pitted against the iPhone 6 A8 chip, and while we knew the results would be in favor of the tablet, not by as much as they are.

The iPad Air 2 benchmark was conducted in order to put the A8X triple-core 1.5 GHz processor through its paces, which works in harmony with the 2GB of RAM. These specs may not seem that great when compared to an Android tablet, but you have to remember the software and hardware are built specifically for each other, and so you don’t experience slowdown like you do with Android trying to work with a multitude of devices, as well as a custom UI placed on top to make life even harder. 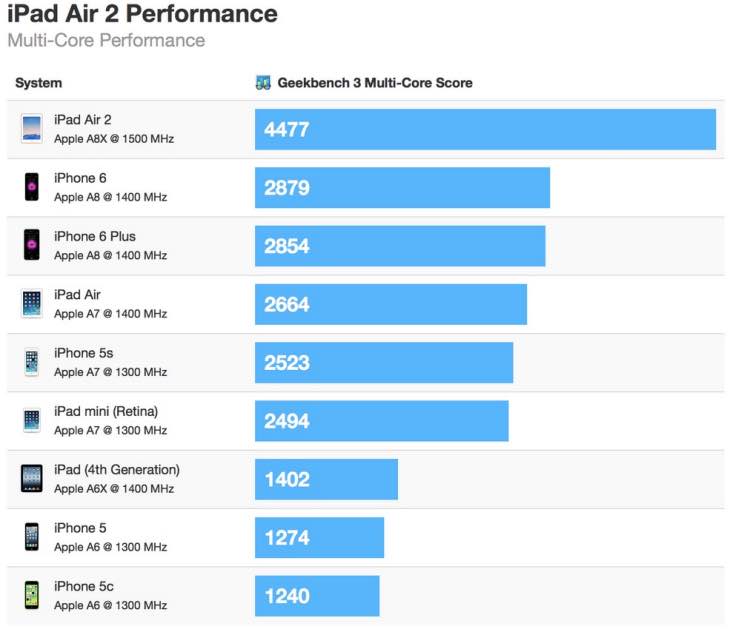 Looking at the image on the recent tweet from iPhoneTeam, we can clearly see that out of all the iOS devices, the iPad Air 2 is right at the top of the benchmark results, with the iPhone 6 in second. The test was to see what the iPad Air 2 performance was like, and the results are far better than we first assumed. The reason for this is due to the fact the new tablet rocks the A8X chip with its three cores, which pretty much leaves the A8 chips used in the iPhone 6 in its wake.

You will notice in the image results above that the iPad Air 2 is around 55 percent faster in the multi-core benchmark than the iPhone 6 and 6 Plus. If you then bring the original iPad into the equation, the newer model is 60 percent faster than its A7 chip. The difference for these devices are not as big when running single-core benchmark tests, but the iPad Air 2 still has the edge.

If you have yet to order your new iPad Air 2 and are still undecided, then maybe the unboxing video below will help persuade you.