Apple are expected to announce and unveil the iPad Mini at another of their specialized events on October 23. It has come so soon after the iPhone 5, but new information reveals that the iPad Mini may not be the only product on Apple’s horizon right now, with interesting leaks suggesting that the iPad 4, or 4th generation iPad is also being prepared for a Spring 2013 release date.

For those of you planning to tune into the event on Tuesday, you’ll need to be ready at 10am Pacific Time as that is when Apple will take to the stage and hopefully unveil a new 7-8 inch iPad to compete with Google’s Nexus 7 and the Amazon Kindle Fire, which both sell for the magic $200 price point.

You may not want to part with your money just yet though, as photos have emerged suggesting that Apple is already in the production stage of putting their 4th generation iPad together, one which will apparently come with an optically bonded screen, a higher quality front-facing camera and a new Lightning dock connector amongst other things.

The picture you can see below is courtesy of BGR and shows you a larger cut out for the alleged iPad 4 front facing camera, compared to the smaller cutout as seen on the current third generation iPad. Regardless of whether an iPad 4 is already in existance, it does seem to be a little strange that Apple would already be planning a new model even though they are seemingly planning to put all of their attention into a smaller model. 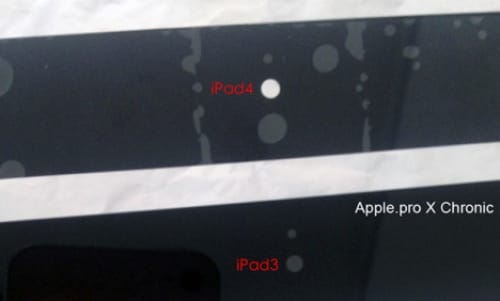 On the other hand, they may feel that consumers won’t really be interested in picking up a smaller iPad, especially those who have just forked out for a $499 new iPad. It is going to take a lot more than just a larger front camera sensor and Lightning dock connector to win over fans with yet another iPad though – have you had enough yet?

We would be very surprised if Apple announced two new iPad devices at the event later on Tuesday, but we all know that these component leaks are not going to go away any time soon. Forget the iPad 3 for now – are you definitely buying the mini iPad, or will you wait for the iPad 4 now instead?