Hearing the iPad 4 and mini will gain 4G in the UK must be exciting for those that can reach this faster network, although the reality is there are a lot of places in the UK that can’t even receive consistent 3G and makes some people laugh at the thought of this technology upgrade already. The key to success will be to make sure that better 3G coverage is attained over the next year, and also the 4G rollout across the UK is pretty fast. The iPad mini and iPad 4 release date is on November 2, which is for the Wi-Fi version although the 4G/LTE version will launch in the middle of Nov.

Within the last 24 hours we’ve seen Everything Everywhere talk about the fourth generation iPad and iPad mini, which they clearly state that these products will be supported by their network in the “coming weeks“. EE state they’re developing some “attractive” plans tailored to iPad 4 and mini users wanting to access data over 4G, but it is currently not known if they will be ready on the iPad 4 / mini release date. The image below had been taken during the Apple event on Oct 23, and shows the Wi-Fi launch date for iPad 4 and mini. 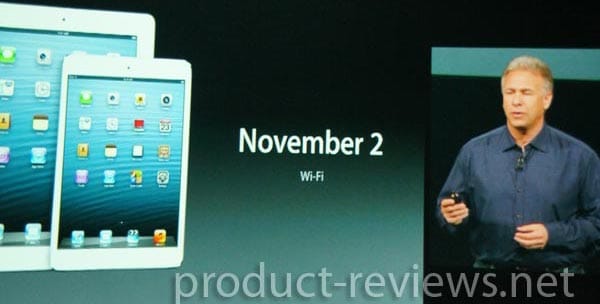 We’ve included the small statement from EE below, which points to the “typically” five times faster 4G speed but also states that T-Mobile and Orange offer fast DC-HSDPA and HSPA+ wireless networks. EE also comment on why the new iPad 4 design is much better, look away 3rd-gen owners, and also key points for the iPad mini. 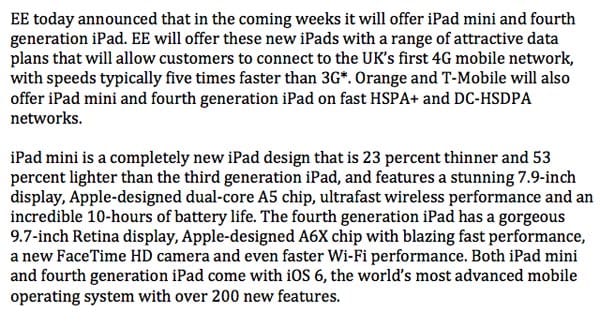 Will you be looking to get the iPad 4, mini on the EE 4G network after release? When the exact date has been published we’ll let our readers know, although in the meantime feel free to share your thoughts on the new iPads. It is worth noting that the Apple Store is down at the time of writing, so you can place a pre-order directly with Apple in the coming minutes but you’d need to be quick with shipping times likely to slip very fast.