Rumors about the iPad 2 have escalated since talks of a next generation model began. And why not? If Apple are as consistent as they have been with the launch of other devices coming at certain parts of year, the iPad 2 should launch pretty soon. You can read exactly when some optimists think the iPad 2 will launch here.

As the supposed launch gets closer the rumors become more far-fetched, none more so than the rumor that the Apple’s new iPad will come with a 7-inch screen. Having manufactured a 3.5“ display iPod Touch to then producing a 9.7” display iPad it seems absurd that the newer model would be smaller.

A tablet of this size has already been released by Samsung Mobile, the Samsung Galaxy Tab some saying the display is too small being nearer the size of a smartphone rather than a tablet, preferring the bigger iPad. Also features like movie playback tend to be enjoyed more on a bigger display. This hasn’t stopped these rumors from persisting about the iPad 2. 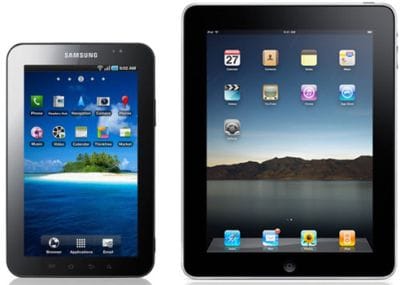 From an article at PCWorld.in we can see that a lot of speculation has been surrounding the iPad 2 and reported before such as microSD card support as well as dual cameras. We have also encountered rumors that it is already known what sort of hardware the iPad 2 will have, although nothing has been officially announced by Apple. Read the full article from PCWorld.in where they also talk about rumors such as NFC capability and a carbon fiber body.

Do you think size matters? What are your thoughts on these rumors? Let us know.