With all the recent reports suggesting that the iPad 2 will be unveiled during an Apple event on March 2nd, it’s no wonder that people are beginning to talk about the possible specs. Among the topics that have been up for discussion recently are the weight of the device and its screen size.

As David Carnoy over on the cnet.com website recently noted, weight can definitely be an important factor when purchasing a new mobile device. Although the original iPad only weighs 1.5 pounds (considerably lighter than a laptop), many still consider this too heavy to hold up for long amounts of time.

While there has been plenty of talk about the iPad 2 featuring a faster CPU and GPU and a front facing camera, a lot of the rumored changes have been about reducing the device’s size and weight. 9to5 Mac claimed to have had its hands on the screen of the new iPad recently. 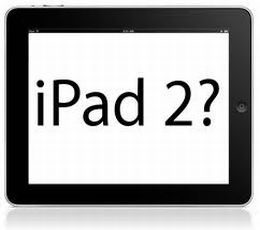 Their article described the possible new display as lighter, and more than a millimeter thinner than that of the iPad. Another rumor from iLounge.com suggested that Apple could well be designing the iPad 2 with new materials, which could shave off a few more ounces.

As mentioned above, another recent point of discussion is the possible screen size of the iPad 2. According to a previous article by Gary Johnson here, new images have surfaced recently, which suggest that the upcoming iPhone 5 could well feature a bigger, edge to edge display.

This leads us to the screen size of the iPad 2. What if Apple was to incorporate the edge to edge display into their next tablet PC? That way they could have a bigger screen size, but without having to increase the size of the actual device itself.

Do you think the iPad 2 should have a bigger screen? How much do ou think the new device will weigh?