With each passing day there seems to be something new about the iPad 2; we already have a good idea about the specs and features that Apple plan to give their second-generation tablet, but there is still much we do not know. However, more details have come to light about the display, as some information on this has been leaked.

Engadget has reported that both 9to5Mac along with iFixYouri has the new display and has even got its part number, which is LP097X02-SLN1. There are a number of key differences between the two displays, the new version is said to be lighter and thinner. If true, then this will mean that it will fit perfectly into the new tampered body, which we reported to you just after CES 2011.

Reading more into this, the rumors of an increase into the resolution could have been false, as 9to5Mac says that it is still the display in the currant iPad. If you head over to their website you will see a range of other photos showing off the alleged new display. 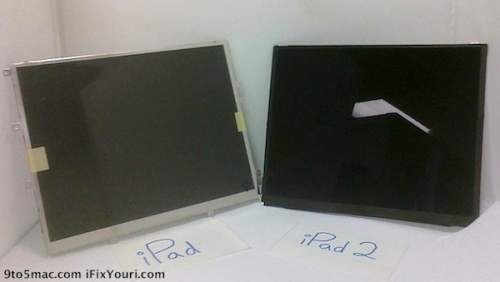 The Apple iPad is now a year old since being announced, so SFGate thought that they would offer what details we know about its predecessor. The first is to do with that display as well, and confirms what most of us have already guessed, and that is that it will not come with a Retina Display. We do not believe that this is going to be a deal breaker, as consumers will still purchase one.

Are you bothered that the Apple iPad 2 will not have a Retina Display?