We have yet more hints that an iPad 2 tablet device is definitely on the way this month, after hearing that iPad 2 cases have shown up at this year’s Consumer Electronics Show (CES).

The device has yet to be officially announced by Apple, although that hasn’t stopped countless leaks and rumors about hardware changes, the most prominent being a smaller display screen and the inclusion of front and rear cameras.

According to this report from Engadget, Dexim is the company to show off their iPad 2 case, and the points to note here is case holes for front and back cameras, and also a separate hole for a ‘larger’ speaker. They also included a mock-up iPad 2 model just to show how the supposed official model would fit inside the case, and we should also tell you that the original iPad did not fit inside the case. 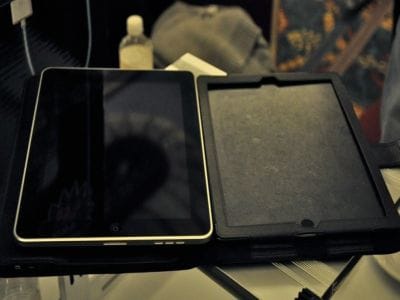 While the case could turn out to be not compatible with the iPad 2 when it finally gets announced, it is very strange to think that Dexim has gone to all the effort of manufacturing it, and then getting it ready to show the world at CES. We’ll let you make up your minds on that one. Check out the shots over at Engadget.