We have some exciting news to bring you now, as no fewer than three unknown Apple iPad SKUs have appeared over on the Best Buy website, seemingly suggesting that the next generation iPad could be announced soon.

As reported from Engadget, a visit to the Best Buy website now, will bring up a surprise as you’ll be able to view a page which lists three new iPad models, which differ from the current lineup available.

You can view the page here, and you can see that there are also pricing details associated with the three models as well. Interestingly, all three models are labelled as ‘WiFi’ models, and two of them carry the same price tag of $599.99, while the other will be available for $699.99.

Obviously, the news isn’t official yet, but considering that these models are listed below the existing iPad models, it does suggest that this could be the iPad 2 we’re looking at here, but there are no other details listed here such as possible hardware specs and a release date. 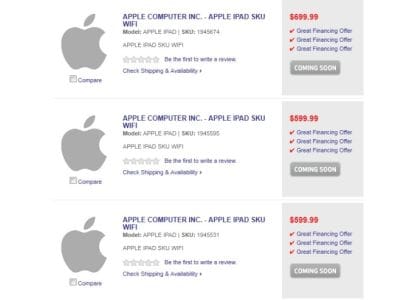 Take a look at the listing for yourself and let us know your thoughts on the new models. Do you think this is the iPad 2 or simply a mistake by Best Buy? Also, it is worth pointing out that Best Buy are listing this new iPad for $599, which is $100 more expensive than the cheapest 16GB WiFi iPad for $499 which you’ll find on the Apple store now. Is this a further indication that Apple are bringing better hardware to the table?