We have already offered details on the iPad 1 vs. iPad 2 when it comes to graphics comparisons, so now we thought it would be better explained in videos. Below you will see three embedded videos, and they all have their own take on Apple’s new and old devices. View the specs of both models.

In the first video it first looks at what’s new in the newest version, and then explains why you should upgrade. We can clearly see that the new iPad 2 is all about design, as it is sleeker and lighter than the iPad 1. In the video they put the 2011 iPad up against the iPhone 4, and you will be surprised that it is thinner than the smartphone. See more in the first video below.

The second video will help you decide if it is worth buying the new model, or saving $100 on the older model. The screens on both tablets are the same, however, that is about all that remains the same. The newer model has the much faster dual-core processor; this will give you almost twice the processing speed. Get a greater insight into this by viewing the second video below. 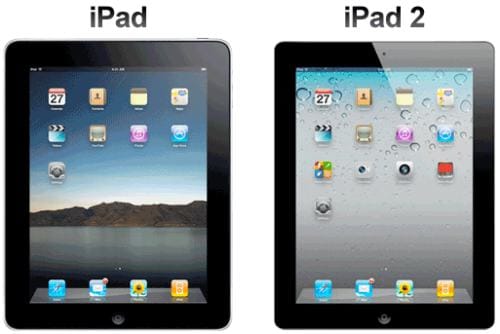 The final video is a speed and performance comparison between the iPad 1 and iPad 2. The first test was all about boot up speeds, and you can clearly see that the iPad 2 was much faster. This is a fantastic test, as both tablets have the same apps installed, so no one can say that a certain app is making either run slower. View the third video below for more details.

Knowing if you want to upgrade to the new version will come down to two things, do you really need a faster iPad, and can you spare the money?