Apple did not create the idea of a tablet device, and even before the iPad arrived there was a sense of something special was coming, and with Apple’s iPhone track record, we knew they could start a new trend. Then the iPad launched, and the rest is history. Apple made tablet’s popular and now most brands are pushing their version, it’s also funny that this happened with the first generation of iPhone as well.

There are and have been problems with Apple products, and this was shown the most with signal issues in the iPhone 4, but its hard to ignore what Apple has done with the iPhone, iPod, and iPad, they’re a trend setter.

Success with mobile devices in 2011, 2012 and the years to come will be based on the support from third-party developers. If you get some really innovative developers onboard, then users will connect much better with the hardware created. It’s great having the best specs, but without the right apps, long-term success is just not possible. Brands want loyalty and this comes with satisfaction after the purchase, which is helped in most part by superior apps when it comes to devices like mobile phones, tablet’s, and even televisions.

With the news that Apple shipped 200m iOS devices and has seen 15 billion app downloads (4.5 billion for Android) from their selection of 425,000 apps (Android has 200,000), this just shouts out to developer’s who also know that Apple’s consumers have credit cards registered with iTunes. Android is growing fast but when it comes to a business opportunity with app development, Apple is still the most attractive.

Google has made Android OS more open to development and this has attracted a lot of fans, and support from many OEMs. Android has a larger range of carriers at the time of writing as well, although this may change once Apple release iPhone 5, especially if we see a global chip (we can hope). 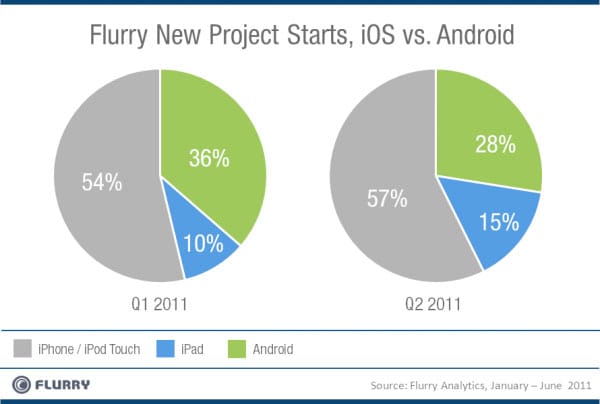 Today we found a nice report from Flurry, a service that tracks different platforms and developer support. The report looks at Q1 to Q2 and new project starts, which seems to point to the iPad 2 and Verizon iPhone slowing Android’s growth. You can read the full report in this article.

What do you make of these findings that show Android has lost support from developer’s to iOS? Those of you that like the iPhone 5 or Nexus 4G, may want to see this early insight.