With Apple’s Worldwide Developer Conference countdown moving into the final 12 hours, it’s also no more than 16 hours until the iOS 9 release time for beta 1 later today. We reminded Product Reviews readers of the regular release date pattern for major mobile OS upgrades, which the date had been pinpointed over two months ago and concept videos have been uploaded since before then as well.

iOS 9 beta 1 release time – while the launch to developers hasn’t even been confirmed yet, it’s almost a certainty unless there’s been a break in previous downloads due to a delay to normal schedule. You should expect the first iOS 9 beta build to go live within 4 hours of the WWDC 2015 keynote end time (8-10pm UK and 12-2pm PDT). In fact, we saw saw beta 1 of iOS 8 up for download in the developer portal much sooner last year. 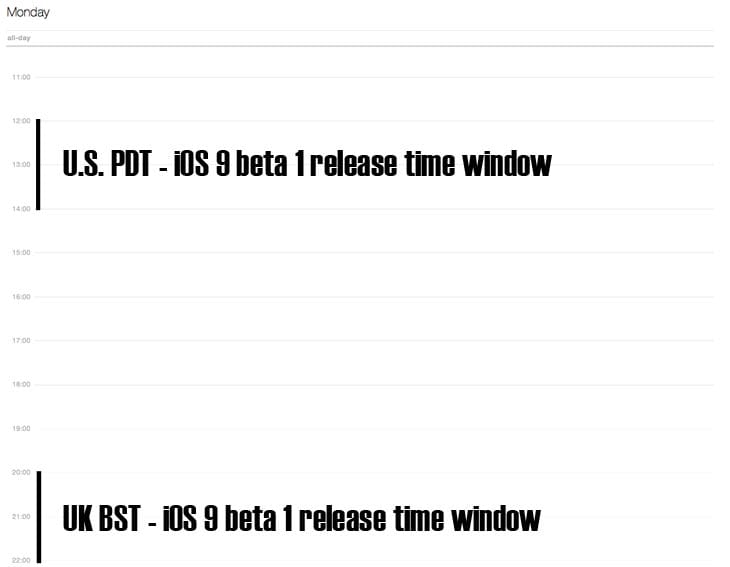 The iOS 9 beta 1 release notes will also be live and these are normally available to public as well, so Product Reviews will publish a link if possible later tonight in the UK / afternoon for United States.

What should change with iOS 9 and do you have desired new features? We would love to hear our readers last minute predictions below and of course if you plan on trying to install the developer edition unofficially. Each year, the general public somehow download beta builds meant for developers at their own risk rather than wait until the public release of iOS 9 in September this year.

Update after iOS 9 beta SDK release notes live – you can read the notes in full on this official Apple page, which also includes known issues that will likely be fixed in beta 2 onwards.