Apple’s next major mobile OS upgrade will be iOS 9 and its gold master release date received confirmation when the September 9 Apple event invites arrived. It’s tradition for developers to receive the gold master shortly after the Apple keynote at iPhone events, as such the same will happen with the iOS 9 download that comes with a predictable release time.

You will see many blogs breaking the news on Apple event day, but you won’t notice anyone talking about the expected iOS 9 release time right now. This is information Product Reviews readers request each year, especially those that don’t know the pattern normally taken.

It’s true the event has moved from a Tuesday to Wednesday this year, but this is due to United States holidays. The gold master always arrives right after the Apple special event each year, or within 2 hours at the latest. You can see a release window below for those in the UK, also the Sept 9 event start time, but just remove 8 hours for PST and 5 hours for EST U.S. time zones. 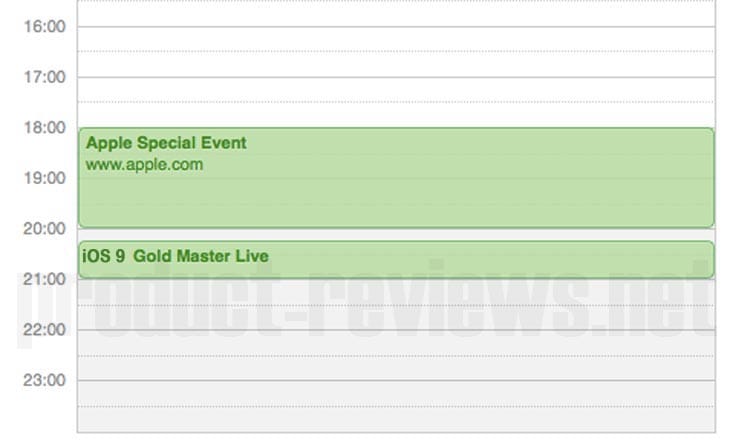 If you were hoping to see beta 6, then most developers will already know this was never going to happen due to how solid beta 5 has been. If another beta did release, then it would have been for testing partners only.

iOS 9 Gold Master release time a certainty — the estimated window seen above showcases both the keynote and expected GM go live time, although the keynote could overrun if there’s a lot to be revealed. This schedule for the GM build isn’t confirmed, although considering the iOS 7/8 GM builds went live at around 8:20/30 PM in the UK then it’s pretty certain.

Expect to see developers receive the iOS 9 GM download by 9PM UK, 4PM in New York, at the latest on Wednesday Sept 9, 2015. You won’t see the public release until a couple of weeks after the keynote, so this will be the second half of September and just before an expected iPhone 6S release date.