The full iOS 9 phone compatibility chart has been updated along with iPad and iPod models since the latest product releases. Considering the iOS 9 public release date is around 28 hours away at the time of writing, we have included the full list of supported devices below to give Product Reviews readers insight before updating.

As you can see, the iOS 9 iPhone compatibility on this official chart reveals iPhone 5, 5C, 5s, iPhone 6 and Plus all being supported with the obvious addition of the new iPhone 6S and Plus. You won’t be able to install iOS 9 on an iPhone 4S/4.

In terms of iOS 9 iPad compatibility you will notice from iPad mini first generation right up to iPad mini 4 are supported. You will also be able to install the latest Apple mobile OS on iPad 2nd, 3rd, and 4th generations but not the first. All iPad Air’s are supported and obviously the new larger iPad Pro. 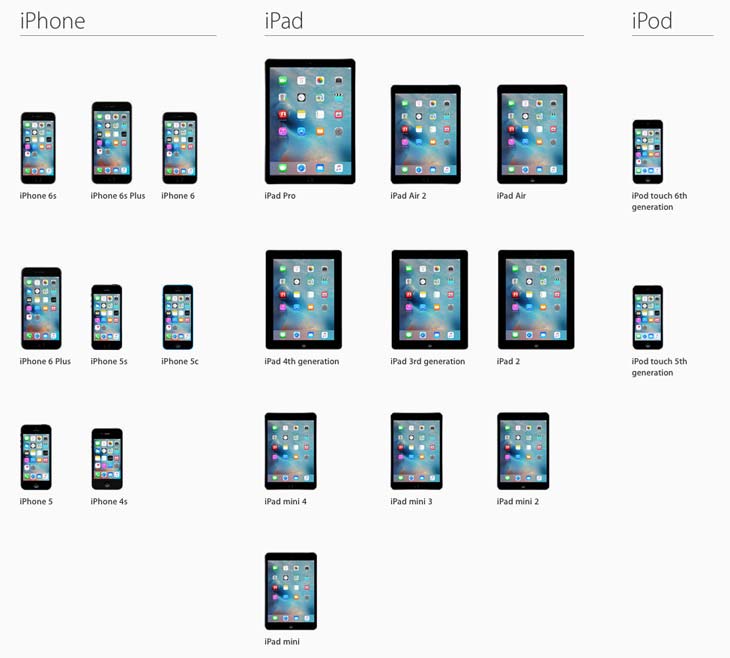 It’s worth noting some features of iOS 9 won’t work on certain models. This includes Slide Over and Picture in Picture, which work only on iPad Pro, and iPad Air or later. The iPad mini 2 and later can also use the said feature, but when it comes to Split View it will only work on iPad mini 4, iPad Air 2, and the new big Pro model.

There’s a few other new features coming to iPhone 6S that won’t make it until iOS 9.1 release, which is currently in public beta form.