This iOS 9 beta 5 article has since been updated to point out that the release notes have gone live. This happened around 6PM on Thursday August 6, which saw the iOS 9 beta 5 download size of 487MB with a number of fixes and adjustments.

The original article: While Apple rarely divulges their schedule for developer updates, it’s almost certain we will see the iOS 9 beta 5 download time fitting previous patterns on Tuesday Aug 4, 2015. This has been the most popular day for each beta release date this year, so we expect iOS 9 beta 5 to follow the same release schedule now we are close to a Gold Master.

The normal live time is just after 8AM Pacific Time and 4PM in the UK. This should be the same for the next developer preview hitting the portal this coming Tuesday, as well as the iOS 9 beta 5 release notes going live by 6PM on the same day.

You will also find the updated SDK changelog in the same place, like we mentioned previously, and these changes are always available for public as well. 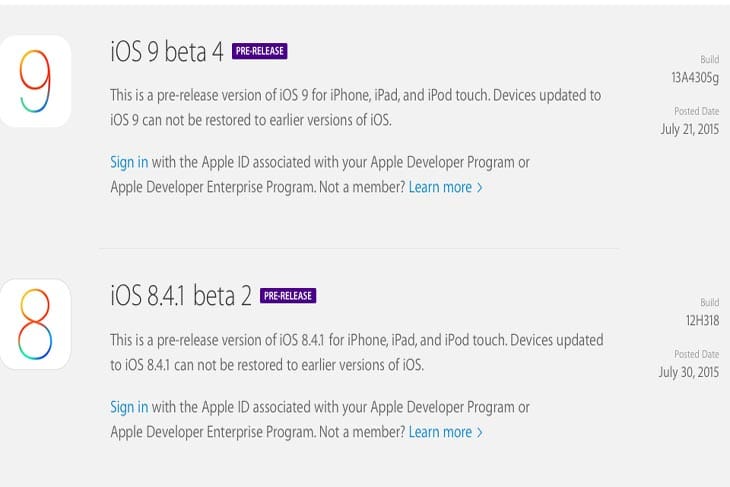 The screenshot above reveals the current status for pre-release builds within Apple’s developer portal, but expect both builds to change in the coming days.

Last year iOS 8 beta 5 went live on a Monday, Aug 4th with UI tweaks and some other changes to Health. As those tracking the schedule this year know, Tuesday has been the favored day and we have seen delays to the 2-week cycle on one occasion, so anything could happen with this being most likely the last beta until iOS 9 Gold Master.

Update Aug 6: iOS 9 beta 5 is live at 487MB and you can see the full release notes right here. The download came 2 days later than expected, and we don’t expect a beta 6, instead we most likely will see the Gold Master next.