The Apple Music launch didn’t pass without its fair share of problems and some developers hope these bugs will be fixed before the iOS 9 beta 3 release date. This has been confirmed to be on schedule for next week, as planned with the two week iOS 9 beta update cycle and obviously it won’t be coming early like some of us hoped.

In fact, earlier in the week we saw a number of developers contact Eddy Cue and ask when “iOS 9 beta three will release?”. The good news is he gave an answer to one of these tweets, which basically revealed the next iOS 9 beta will be live for download “early next week”. This all but confirms the release date, as July 9 due to this being the next day in the two week cycle. 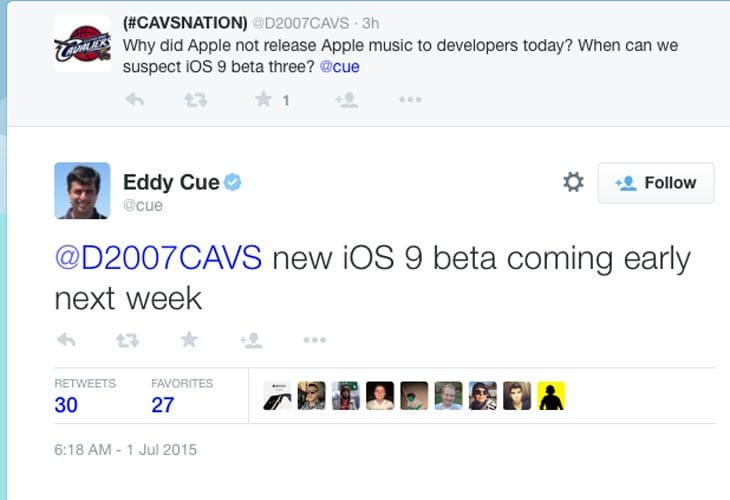 You can see the Eddy Cue tweet above that we’re sure some of Product Reviews readers have already seen. You should also expect the normal release time for iOS 9 beta 3, so this will be between 4PM and 6PM in the UK, or 8AM to 10AM in PST USA.

Problems with iOS 9 to fix in beta 3 – the release notes won’t fix everything, especially considering we have a number of betas to go before the public release date in September 2015. What isn’t fixed and aware of will be listed in the update notes, also those issues fixed will be highlighted as well.

Others have reported battery life issues with various models of iPhone and iPad, also when you close the celluar data it seems the data roaming part doesn’t go off for some. Apparently, this doesn’t happen until about 5 minutes after when it’s supposed to not display. Again, these issues could be wide reaching or for isolated developers, and of course this is a beta after all.

We will update our readers when iOS 9 beta 3 is live for developers to download, as we know thousands of our readers make up some of the several million developers.