The iOS 9 beta 2 download can be performed over the air when moving up from the first beta, but this isn’t working for thousands shortly after it went live. Our in-house developer reports they try to install OTA and see an error stating, “Software Update Failed. An error occurred downloading iOS 9 beta 2”.

You can see a screenshot taken moments ago when trying to install iOS 9 beta 2 OTA and the said error message is clearly seen. The file size is 397MB for this particular update when performed over the air, although our developer hasn’t been able to do this after the problems mentioned. 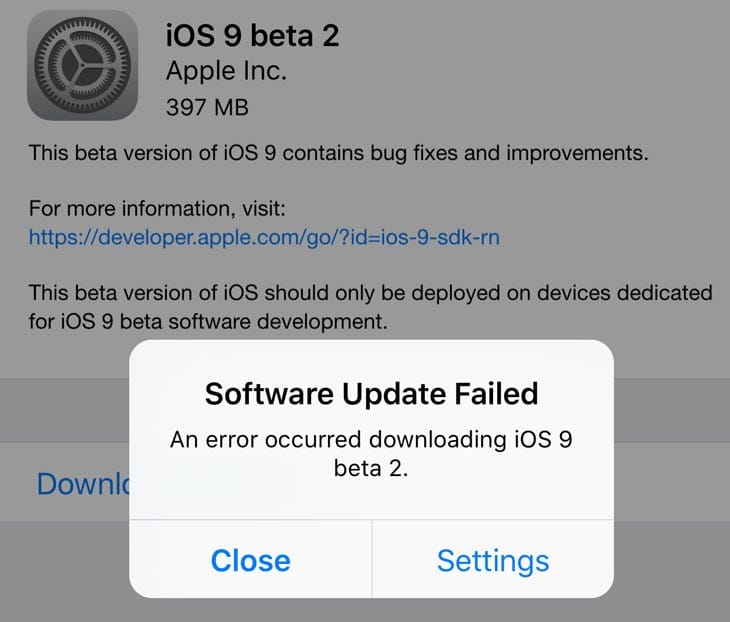 Apple wouldn’t allow the beta 2 update OTA if this wasn’t possible and would only allow for developers to download directly at the portal. With this in-mind, it’s clear this issue will be fixed within the coming hours and most likely sooner rather than later.

It’s worth mentioning that other developers report on Twitter that the download is live and working in the dev portal, and also that they experience the above error message as well when trying OTA.

If you are one of the millions developing apps with Apple, are you able to download iOS 9 beta 2 OTA right now? The good news is this problem won’t need a beta 3 to fix, as it will be something wrong with Apple’s servers.