iOS 9.3 Beta 1.1, classed as build 13E5181f has been released to developers because of an issue that needed to be addressed. However, now that these critical bugs were fixed we suspect that the iOS 9.3 public beta release could be imminent.

The update is available right now OTA and is a very large download, as we have been told that it is at least 1.6GB, and so is a significant update.

According to MacRumors iOS 9.3 1.1 beta fixes an issue where devs were having issue with the installation process when it came to install iOS 9.3, as it would often freeze on them. 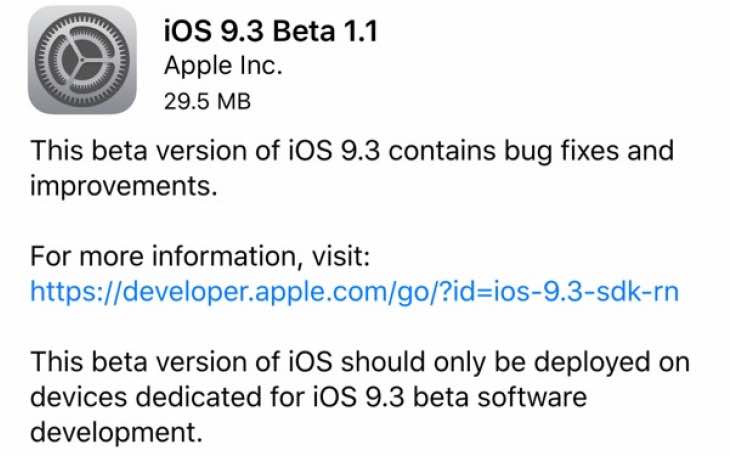 The issue was more of a problem for the iPad mini 2, and so Apple had to address things before they went any further with the mobile operating system.

Other issues been addressed – That was not the only problem, as Apple also had to fix an issue with apps, although only those that had to use compass data for devices that does not include a motion coprocessor.

The apps being used on these devices would often crash all the time the compass was being requested.

It’s not all about fixes though, as some new features have also been added, such as the new Night Shift mode that reduces the amount of blue on your display, and also apps such as Health, Notes, CarPlay have also been updated with improvements.

What else would you like to see once iOS 9.3 is finally released to the public?