Since Apple released their iOS 9.3 beta 3 yesterday people have started to wonder when the public beta version of this update will be released. Based on the beta 2 release timescale we would say either today or tomorrow. It’s only been two weeks since that last beta version was released, and so Apple is starting to move at a fast past.

With this in mind, it does look as though iOS 9.3 will finally get its public release very soon, although we are sure Apple still has a few tweaks and improvements to be made first.

Not much has really changed with beta 3 over beta 2, although we do know that there is finally Verizon Wi-Fi calling to allow Big Red customers to make calls over WiFi rather than going through their calling plan. 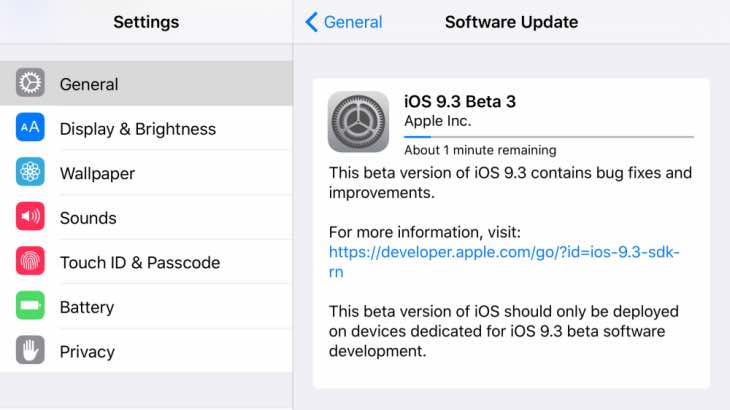 That’s not all, as the T-Mobile bug that prevented apps from loading over a cellular connection has finally been fixed.

Some of the other fixes and improvements are only minor, although it all helps. Take Apple news, this now comes with more personalized recommendations, and Health comes with an Apple Watch-style “Activity” view.

Apple Music has also been updated so that carPlay now gets two new sections and these are “New” and “For You”. There is not really much else new with this latest update.

What feature are you looking forward to using once this update finally goes public?