Oh dear, it seems like since people have installed the iOS 9.1 update there are a few new problems, along with some persistent ones as well. It is for this reason why we have heard from some of our readers saying they are now going to hold off this update, as they would rather wait for the iOS 9.1.1 release.

iOS 9.1 problems – One of the issues that people have been talking about is still not being able to see the new wallpapers that was meant to be there in one of the previous versions of iOS 9. Others have said that the bug still exists where the iPhone or iPad gets stuck when going from portrait to landscape, and also the touchscreen being unresponsive. It’s worth pointing out that this is an isolated issue, and so not all users are having this problem. 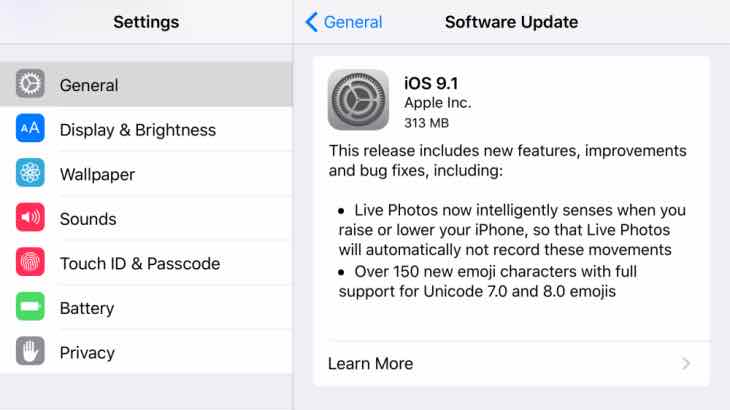 Another problem being reported is not having the option to show contact photos in the message list. Two others issues that we are hearing a lot about is the Podcast minutes fwd bar has not been fixed, and when multiple tabs are open and you go back to the first one it freezes, which can only be resolved if you force the app closed.

Try not to dwell too much on these problems though, as they are not as widespread as those we have seen in the past, and iOS 9.1 does come with some great new features; one of which is the News app for some countries outside the US. Then there is also the middle finger emoji that many of you seem to be excited about.

What issues have you come across, and what are your first impressvsies with this latest update?