It’s been two weeks since iOS 9 was released to the public, and right on cue Apple has pushed out its first update, 9.01. It’s nothing unusual for an update to come shortly after a new version of the mobile OS, as there are always going to be some early issues that need to be addressed.

With the iOS 9.0.1 update live we can also see the release notes, and it shows what has been fixed — although no sign of any improvements for those of you having battery life issues. 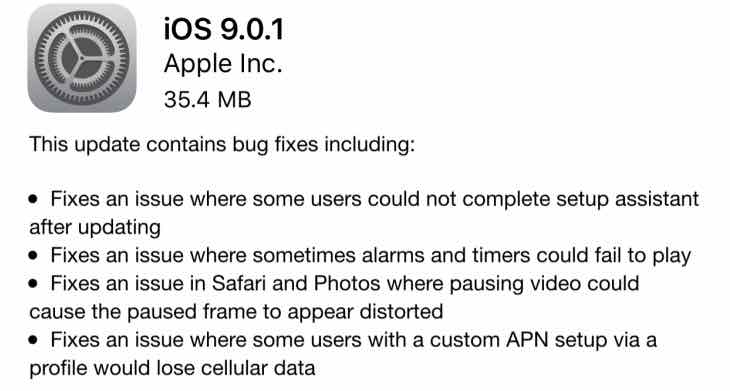 The iOS 9 issues that have been addressed in this first update are Setup Assistant app no longer gets stuck on Slide to Upgrade. The current problems with alarms and timers failing to go off have also been fixed – although we have not had any of those issues.

The final bug that has now been rectified is that your cellular connections will no longer be disabled when setting a custom APN.

What have noticed there is no mention of fixing some of the many other bugs, such as clear history button randomly disappears, phone often unresponsive, lock screen sometimes does not work, and also the phone can restart for no reason. Not every users is having these issues, although we suspect that Apple will not fix these until they know they are widespread issues.