Even though we have told you that the issues with iOS 8 are not as bad as some tech websites would have you believe, there are still ongoing problems, ones that even cost people money. Since people updated their cellular iPad to iOS 8 they have been experiencing date usage problems on Verizon. It would seem that some customers have noticed their data being used at a much faster rate than usual since updating to Apple’s latest mobile OS.

You can understand why people would be livid with Apple, especially those who have paid a huge sum of money to purchase a new phone, only to go over their monthly data plan and incur a charge in the process because of going over said data limit. 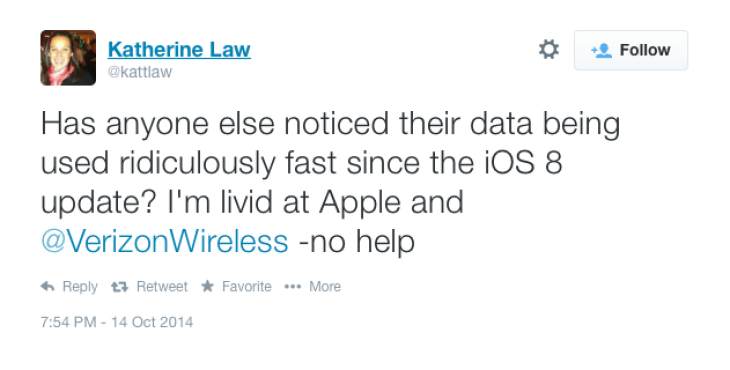 It is not only an issue with iOS 8, but 8.0.2 as well, and therefore are crying out for 8.0.3 to be released to resolve this huge bug, unless iOS 8.1 is released on Thursday instead. Spare a thought for those who do not check their data limit, and found that it had all been used up, although there could be a solution.

We have been informed by a friend that if you go to your Settings, iCloud, then Documents & Data, all you need to do is turn off Use Cellular Data along with apps you do not wish to use data.

Going back to the iPad, we have also heard from several of our readers that since updating iOS 8 their iPad is almost unusable. They did not state what model this was happening on, although we do know that the second generation model has had more than its fair share of issues.