The iPad Air unveil last October showed that Apple is still being very conservative with the design of its iOS tablet because it hasn’t changed that much in terms of looks, albeit from going on a bit of a diet and a slightly thinner bezel.

We had hoped that Apple would embrace some of the technology that is available, although we have seen more often than not they would rather play it safe and only do something radical when the time is right, you only have to look at the all-new Mac Pro to understand this.

Past iPad concept designs with desired features – It’s always nice to look to concepts to see where the likes of Apple could go, and we have certainly seen some radical ones appear last year.

Some of those concepts were based on ideas that people had hoped would become the iPad 5, which is what we assumed the 5th-generation model would have been called. And if you think that some of these concepts, and the second image below would also be based on one of these future designs, then think again.

One such concept is an iPad 6 or Air 2 that comes with Touch ID, which is illustrated in the image above. This is one of the more likely concepts because the technology is already in use on the iPhone 6, and we see no reason why Apple would not include it on the 2014 iPad.

We know that Apple will come up with a futurist iPad design one day, but what you see from these videos are years away because battery technology is still holding us back. However, we do know that Apple has been looking into this very subject, along with some other engineers, although not sure we will see an iPad or an iPhone powered by sugar or potatoes any time soon.

You might ask what we’re on about; well there have been reports that research into smartphones and tablets being powered by these food items in around 3 years time, but it’s rather hard to believe. 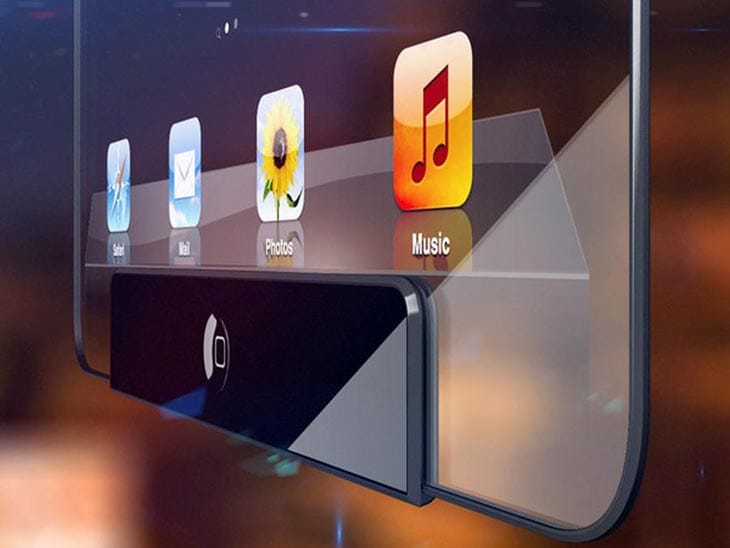 One iPad concept that keeps popping up time and again is the one that looks like a set of glass bathroom scales. We have to admire its design because it is so out there, but it’s highly unlikely to happen for the foreseeable future. However, what is more likely is a true edge-to-edge display, although we feel as though this would be pointless on a tablet because of the way you have to hold it.

iOS 8 update features desired in new concept videos -The moment we knew that Jony Ive was to be involved in the development of iOS 7 we knew that he would make some major design changes, and we were not wrong. However, many iOS 7 users believe that these changes never went far enough. We know that it was a complete design change, but its features were not radical enough and some of them had been in use on Android devices for a good couple of years now.

Again, Apple doesn’t always wish to be first to the market with something because they would rather gauge public reaction and only deliver it when they feel the time is right, although some of you will say this is a lazy way of doing things.

Now that iOS 7 has been available for 4 months we know that Apple will unveil iOS 8 in the summer, so it’s no surprise that we have already started to see some iOS 8 concepts appear.

We have a selection of concept videos for you to view below, some look at what iOS 8 could look like, while others discuss some wanted features and what the next iPhone could look like.

We do know from a huge response from Product Reviews readers that customization is still one of the most wanted features, but this is never likely to happen so you will have to jailbreak instead, although that’s at your own risk.

A few ideas of what iOS 8 could feature would be the ability to replace standard Apple apps like email, maps etc. and choosing a third-party option instead. With so many ideas we could spend the next two hours rambling on, an so it would be far better if you watched all of the videos below to get a greater insight into what iOS users would like to see with the next major version.