The iOS 8 review videos are starting to arrive and we’ve been in contact with our in-house developer who is giving the new operating system a hands-on as well. Product Reviews will want to make sure certain apps work fine in iOS 8 on iPad and iPhone thanks to beta 1 being up for download, although those of you that want to see the full release notes can do so in this article.

We will get some first impressions published of iOS 8 running on an iPad mini in the coming days, although for now we have a couple of videos for our readers to watch below on this page. The first takes a look at the eighth generation mobile operating system on both an iPad and iPhone, especially the QuickType feature and Health app. 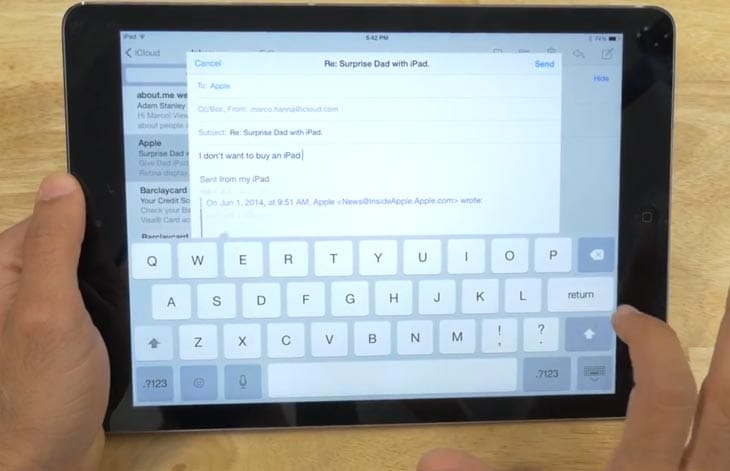 You can see a screenshot above of typing within the iPad email app in iOS 8 and this part of the video, taken from the first video, reveals a quick glimpse of using QuickType. The new predictive text system will aim to recognize what the chat is about and then offer different suggestions for words you might want to type next.

It will be interesting to see how well iOS QuickType works for different users and chat styles, especially considering some people hate the idea of predictive text and would rather turn it off. The first video also gives you a quick review of other iOS 8 features like the new Notification Center, Touch ID, Camera, and Photos app.

The second video is titled “QuickType Keyboard Predictive Text Review”, and takes a look at the new iOS 8 on the iPhone 5S. This hands-on video focuses just on predictive text, so you’ll get a really good look at the new keyboards and QuickType in action.