Apple was expected to release iOS 8 beta 3 at some point Tuesday, but instead we’ve just seen the download go live in the last hour with an updated page for the release notes.

If you are a developer, log in to the online portal and you will find the updated iOS 8 beta 3 tab next to iOS 7 SDK at the top, as seen in the screenshot on this page. The July 7 build for iOS 8 beta 3 is listed as “12A4318c”, although only developers can download the file thanks to Apple requiring paid access and registration. 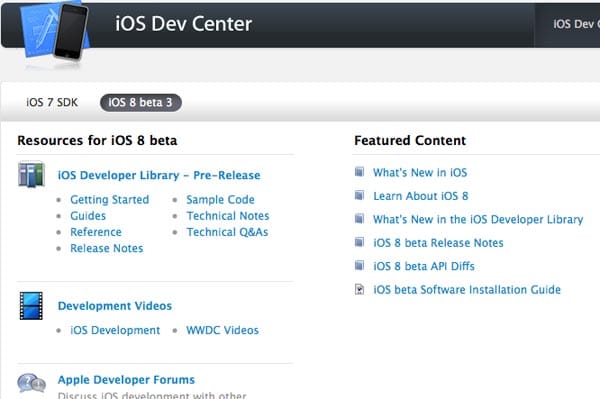 We’ll go hands-on with the latest release in the next few hours and take a look with our in-house developer to see what changed. The iOS 8 beta 3 release notes haven’t been updated at the time of writing and still list the old changes, although you can expect this to change shortly and they can be accessed via developer.apple.com.

Once we’ve had time to test the updated version, we’ll let our readers know if the current crashing and freezing experienced by our developer has been fixed.