We have now included the full iOS 8 beta 1 release notes below this article with known issues and workarounds for each problem where possible. When the beta 2 update arrives we’ll be sure to update our readers.

This year we are likely to see developers trying to access the iOS 8 beta 1 release notes right after Apple’s keynote, although we could see some problems if you try to download the update right away thanks to there now being well over 6 million developers. Last year, we saw broken pages within the members area thanks to a rush of developers trying all at the same time.

Apple can only handle a certain amount of demand to their website at once, so any issues expected to take place will be short lived. We expect that iOS 8 beta 1 will be available to download today, but the link can only be accessed from within the member control panel for official downloads. This will also include the list of notes for iOS 8 beta 1, although again this is for developers that have paid a yearly fee after being approved by Apple.

We will feature screenshots of the iOS 8 preview during Apple’s keynote at WWDC 2014 and a few articles on what new products and services get announced. The screens will reveal new APIs and features available to developers once the Dev Center returns after an update expected tonight, although be warned that if a small percentage from the millions of developers all try to access the dev portal at once then it could slow up page loading times like last year. 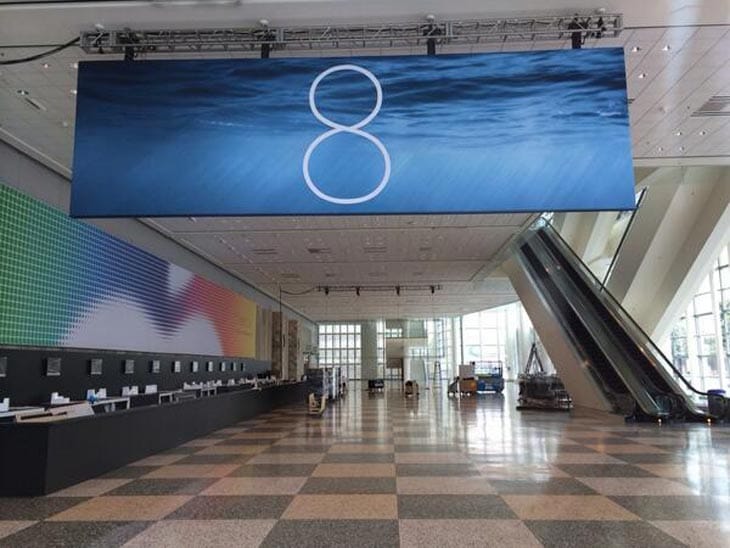 You will find the iOS 8 beta 1 release notes on this page once they go live within the developer portal, so make sure you visit the social channels for Product Reviews or this page later today after Apple’s keynote. We won’t expect the iOS 8 beta 1 to release for iPad straight away, and this would follow a pattern of only the iPhone getting a beta to start with just like previous versions. Future betas will bring iPad support.

Check back later as this story is developing. It’s not clear how much will change with iOS 8 vs. iOS 7, although we can’t wait to bring our readers hands-on screenshots and further details in the coming days. 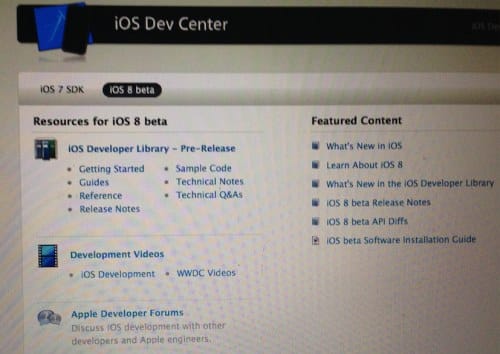 Workaround: Clients should send update requests for a given zone one at a time. In addition, they should handle CKErrorZoneBusy errors by retrying with an exponential back off.

Note
The Address Book UI people picker has been changed for iOS 8. A new mode with new API has been added where the app does not need access to the user’s contacts and the user will not be prompted for access. A temporary copy of the selected person is returned to the app. See ABPeoplePickerNavigationController.h for more details.

In this beta, you have the choice of using either the new mode or the old mode. The old mode will be deprecated in a future iOS 8 Beta, so you should migrate to the new mode as soon as possible.

Note
Your app needs the iCloud documents entitlement to be able to use the document picker.

File System
Note
The file system layout of app containers has changed on disk. Rather than relying on hard-coded directory structure, use the NSSearchPathForDirectoriesInDomains function or the URLForDirectory:inDomain:appropriateForURL:create:error: method of the NSFileManager class. See Accessing Files and Directories.

Find My Friends
Note
Now that the Share My Location feature is integrated into Messages, Find My Friends only supports the Apple ID configured in Settings > iCloud.

Fonts – Known Issue
Some Hindi strings are incorrectly displayed and cause search and rendering issues.

Known Issue
In some cases, signing into iCloud can take up to two minutes.

Localization – Known Issue
There are a number of strings that will display in English for people running the iOS in other languages. Known areas of concern include, but are not limited to:

Media Player – Known Issue
MediaPlayer.framework – MPVolumeSettingsAlertShow() does not display a volume slider or the AirPlay controller.

Newsstand – Known Issue
Content downloaded via NKAssetDownload doesn’t get returned to the app.

Reminders – Known Issue
When you select Edit in a list of reminders and then scroll, reminders in the list are no longer editable.

Setup – Known Issue
Updating iCloud settings screen may appear to hang during setup.
Workaround: Some accounts may have an extra long lag. Wait a couple of minutes and they should complete.

UIKit – Note
UILabel has a default value of YES for clipsToBounds. This differs from the normal UIView default of NO.

WebKit – Note
Subpixel rendering is now on by default for all web content. Web sites or in-app web views with extremely tight design constraints may render differently. Solutions for each issue will vary, but use Web Inspector to adjust position, border thickness, and width or height of elements.

Widgets – Known Issue
Mapviews do not load tiles in widgets.