Now that we are about to move into May, the month before WWDC 2014, we thought it would be a good idea to take a closer look at when the iOS 8 beta 1 release date is likely to be and this is a little more obvious than some people think.

Apple tradition shows us that the iOS 8 beta 1 developer download should see a release on June 2, thanks to that being the date of Apple’s keynote address and traditionally access to the first beta is given right after the speech. This would mean developers should be able to download iOS 8 beta 1 either on late June 2, or June 3 depending where you live in the world. 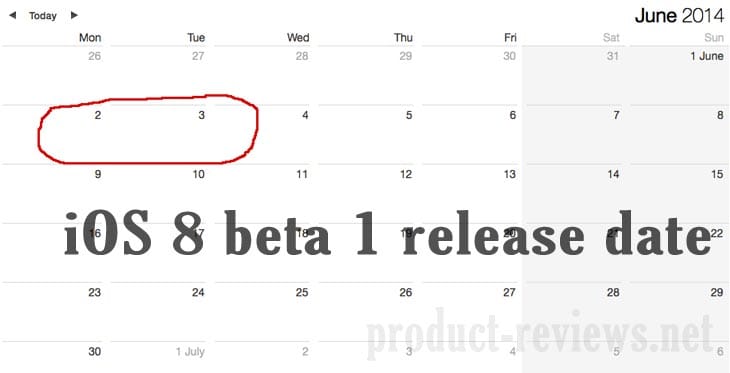 Public users wanting iOS 8 beta 1 – when the release date arrives for the first testing to start you can count on non-developers trying to install the new mobile operating system, and this means some people will even sign up for paid services to get access to iOS 8 beta 1. In fact, some services are already taking orders for early access to iOS 8 many months before a public release date arrives (Sept).

We should warn our readers that this might not be a good idea, although if you plan to do this then watch out for scams by reading up on certain services first and be warned that a beta will have bugs, so you may create problems with your iPad or iPhone. Developers pay just under $100 a year for the honor of developing for Apple, and they need to register an iPhone’s UDID number, so this is why it’s not that easy for non-developers to install the next software upgrade.

You can expect a detailed preview of iOS 8 at WWDC 2014 that will reveal a lot of the new features, although there is always a number of changes made throughout the year thanks to developers finding bugs and some new features not being revealed thanks to their tie-in with iPhone 6 / iPad Air 2, etc.

Will you wait until the public release date much later in the year, or will you try and install the iOS 8 beta early?

We looked at some WWDC 2014 predictions for Mac mini in a previous article, so feel free to have a read a join in the debate with other Product Reviews readers. We would also love to hear the changes you want with the next major iPad and iPhone software update, like the ability to stop certain text messages and Touch ID, so leave a comment below with your wish list.